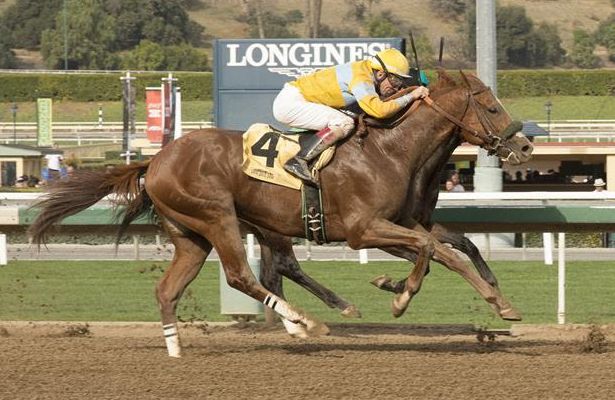 The California-bred son of the late Lucky Pulpit, out of the mare Love the Chase, came with a flurry in the stretch under new jockey Tiago Periera to prevail by 3 1/4 lengths.

Faversham is trained by Art Sherman, who conditioned Horse of the Year California Chrome, and was bred and owned by Perry Martin and his wife, Denise. Perry Martin was one half of the “Dumbass Partners” group along with Steve Coburn to originally campaign Chrome, the 2014 Kentucky Derby and Preakness Stakes winner who went on to achieve even more success as an older racehorse.

As Faversham tracked down a fading leader Clyde’s Pride in the stretch, race caller Michael Wrona exclaimed, “Big brother will be proud!”

Faversham showed little after what was a promising debut on the dirt on Jan. 15, when he broke slowly but rallied for second. He went straight into the California Cup Derby from there, running eighth, and had one other finish on the board in his three other starts heading into Thursday.

Hope’s Love, a full sister to California Chrome foaled in 2013, never won in five starts. R Sunday Surprise, the filly who followed in 2014, took eight races to find the winner’s circle. This time around, the combination of Lucky Pulpit and Hope’s Love produced another victor.