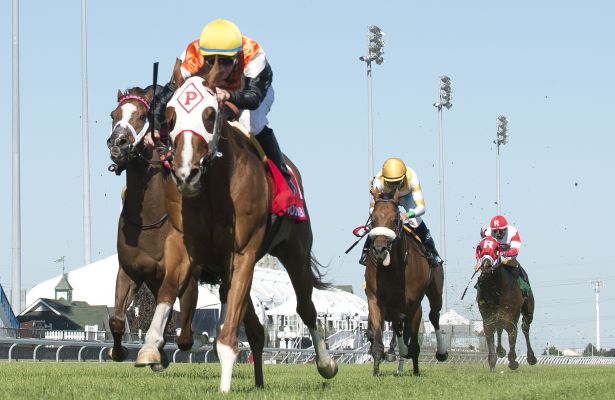 With jockey Gary Boulanger aboard for trainer Tom Proctor, the forwardly-placed Caribou Club took command in the stretch and staved off the patent late kick of Tower of Texas for his first graded stakes win in the seven-furlong turf sprint for older horses.

Dimension, the 2016 Connaught champ, and Yorkton took turns on top through fractions of :23.42, :45.45 and 1:08.26 with Caribou Club racing behind the leaders along the inside before splitting rivals off the turn to forge ahead. Meanwhile, Tower of Texas launched his bid widest of all from the backfield in rein to Eurico Rosa Da Silva, but couldn’t catch Caribou Club, who held clear by 1-1/2 lengths at the wire in 1:20.22. Favourite Conquest Panthera was a game third, finishing just a head back of Tower of Texas.

Sent postward as the 8-1 fourth choice on the toteboard, the four-year-old City Zip-Broken Dreams gelding was overlooked by the betting public despite coming off a winning season’s debut in the Henry S. Clark Stakes at Laurel Park on April 21. A five-time winner from 12 starts, Caribou Club returned $18 to his backers at the betting windows.

“I just had to help him out of the gate the first 20 yards [because he’s got that extension blinker] and once I got in position, I was just sitting there waiting for a spot,” said Boulanger. “He had me in great position and when I asked him, he exploded.

“I could hear Eurico coming. You usually hear him yelling down the lane so you know when he’s coming or when he’s not, but my horse was still running.”

editor - June 3, 2018
0
Ridden by William Buick, Masar ended a series of Godolphin Classic defeats to give Sheikh Mohammed a momentous triumph in the prestigious Flat...

Guineas eighth Most Gifted fancied to see off four rivals |...

Hainan on its mark to kick-start horse racing in buildup to...