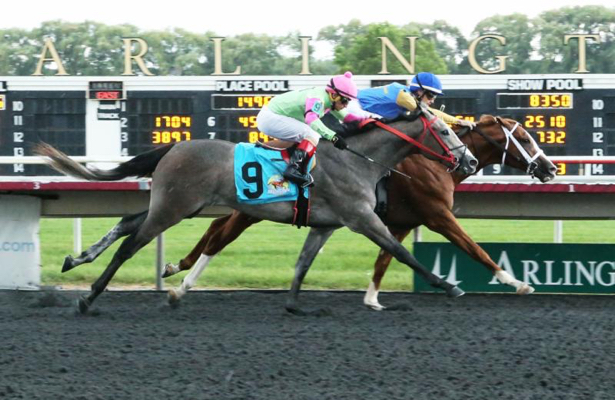 Owner Susan Moulton, trainer Wayne Catalano and jockey Channing Hill team for both of Ellis Park’s $75,000 2-year-old stakes Sunday, with Spice It Up in the Debutante for fillies and Manny Wah in the Juvenile.

Manny Wah has shown enough in two races — a second to a nice horse at Churchill Downs, followed by neck win after battling for the lead through fast fractions at Arlington Park — that Catalano isn’t afraid to mention hopes of making the Breeders’ Cup Juvenile Nov. 2 at his main base of Churchill Downs. Spice It Up, however, is more of an unknown.

Moulton bought the filly July 9 at Fasig-Tipton Kentucky’s horses of racing age sale for $140,000. In her only start, when trained by Ohio-based Tim Hamm and co-owned by breeder Three Chimneys, Spice It Up came from a stalking position to win by 8 3/4 lengths at Thistledown.

“Definitely,” Catalano said of having the Breeders’ Cup at home on his mind. “Definitely with Manny Wah. The filly, we’ve got to see. Manny Wah is going to get better. He’s got everything it takes. His daddy was a runner. His mama could run. He looks like he can run on anything. He’s run a couple good races; his second race was a pretty darn game race.”

Spice It Up’s team is hoping for the immediate success that they enjoyed with another horse bought out of the same sale: the 3-year-old filly Altamura, who in her first start after Moulton bought her for $205,000 won Laurel’s Camptown Stakes for Virginia-breds on Aug. 4.

“We like everything about her,” Catalano said of Spice It Up, a daughter of 2010 Kentucky Derby winner Super Saver. “The filly has been in the program five, six weeks and is really coming around very nice. Obviously she ran well her first out. We’ll see when she runs back, we’ll get a better feel of how she is.”

Manny Wah comes by his distinctive blaze and white markings below his jaw honestly, being a son of Will Take Charge, the 3-year-old champion of 2013 who had his own distinctive “chrome.”

Hill says Manny Wah was impressive in his initial defeat. “He was ready, but he wasn’t like top-notch ready,” he said. “He ran really well. He really moved forward from being a little green and showed he had a lot of promise. When he won at Arlington, that was just as impressive. He ended up making the lead and was a little green down on the inside. But I was never worried that the other horse was going to outrun him. And they just sold that horse who ran second to him for $200,000.

“Wayne has stated from the beginning that this is his Breeders’ Cup horse. Obviously I think that’s the goal. If he comes with a big effort Sunday, you’d have to think he’d be competitive in the Breeders’ Cup. It looks like a pretty good little race Sunday. If we can beat Whiskey Echo (third in Saratoga’s Sanford), then we belong with the horses at Saratoga. Hopefully that horse-racing math adds up. I’m really looking forward to it. Not only does he have the talent but the right frame of mind, too.”

Hill is married to Wayne and Renee Catalano’s daughter, Shelbi. It could be a big week for the family as Hill will ride the Catalano-trained Farrell in Saratoga’s Grade I Personal Ensign on next Saturday’s Travers Stakes card. Hill guided the 4-year-old Farrell to victory in Saratoga’s Grade 3 Shuvee in her last start.

Ten interesting facts and stories from the Punchestown festival | Horse...