Rascal and Knight the each-way value

He worked on the Round Gallop this week and looked in great order under James Doyle. This tall, athletic colt is expected to handle the track and the recent rain is no negative for him.

Masar went well on the Limekilns as Godolphin put the finishing touches to his preparations while Roaring Lion stretched out well on the Al Bahatri. The Dante winner is joined in the field by Sevenna Star, who limbered up on the Round Gallop. He may lack the class of his stablemate but will handle any cut in the ground.

Saxon Warrior looks hard to beat in the feature, but there are plenty of big priced each-way alternatives including Harry Dunlop’s Knight To Behold.

The Windsor House trainer usually manages to get hold of a very useful three-year-old, and he has certainly maintained his record with this son of Sea The Stars.

Unlucky to be beaten by the subsequent Craven Stakes runner-up White Mocha on his debut at Newbury, he then won a maiden at Newmarket before drawing stumps for the season. Dunlop headed straight for the Derby Trial at Lingfield for his debut run as a three-year-old, and he produced a first rate front-running performance to outstay Kew Gardens by an impressive three and a quarter lengths.

Knight To Behold will have to produce more to be any sort of danger to Saxon Warrior, but he is entitled to improve plenty for what was just his third outing, and he should be staying on when others are crying enough in that demanding final quarter mile. 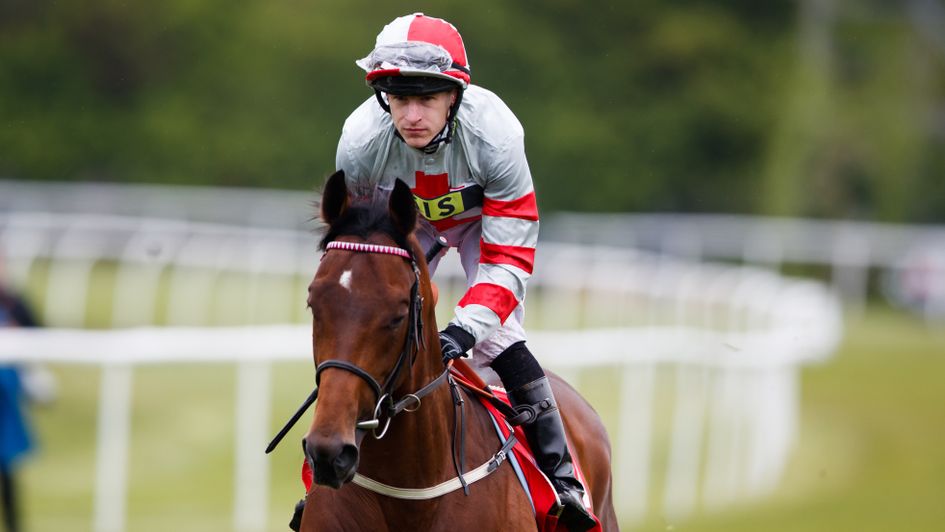 Whilst he cannot boast a strong win-to-run percentage, the five-year-old was a consistent performer for Andrew Balding and ran arguably his best ever race in the corresponding event 12 months ago.

Slowly away, he was continually denied a clear passage, but finished to such good effect, he was only beaten a short head by course specialist Caspian Prince.

He made a great start to his career with Dixon when a neck second to the bang-in-form El Astronaute on his reappearance at York last month, and given a better start and untroubled passage this time around, he looks sure be concerned in the finish from his high-number draw once again.

Melting Dew won first time up last season and he merits each-way consideration on his reappearance in the Investec Out Of The Ordinary Handicap.

Sir Michael Stoute has a solid record in the middle-distance handicaps at this meeting, and Melting Dew has sufficiently few miles on the clock to suggest he can improve on what was a promising three-year-old career. The fact his trainer has stuck with him for another campaign rather than directing him to the sales ring suggests connections agree there is more to come and he should handle the prevailing ground okay.

The progressive Century Dream has been a fine advertisement for Simon Crisford’s training skills, and is fancied to land his first Group Three win in the Investec Diomed Stakes. The heavy rain over the past few days has played to the four-year-old’s advantage, and he has been working very nicely since his win over Crazy Horse in a Listed event at Ascot a month ago.

Sylvester Kirk also likes to feature strongly at this meeting, and George can show his appreciation for a step up to a mile and a quarter in the Investec Private Banking Handicap. The son of Dragon Pulse is still a maiden, but he has produced some solid performances, and ran two of his best races on this course and at the equally tricky Brighton last back-end. The previous experience of those undulations should help him go well.

So too should Court House at the other end of the weights. John Gosden’s progressive type moved well on the Al Bahatri in preparation for this and if George does beat him, that may well be enough to take the £31,125 first prize.

Ryan Moore is an interesting booking for Roger Varian aboard Shenagians in the Princess Elizabeth Stakes and the trainer is likely to be among the winners over at Doncaster, too. He saddles San Donato in division one of the Betfred ‘Treble Odds On Lucky 15’s’ EBF Novice Stakes and this well-regarded son of Lope De Vega can pay a handsome compliment to his Yarmouth conqueror Legends Of War by landing this.

Saeed bin Suroor is not quite as well known for winning first time with his juveniles as his Godolphin colleague Charlie Appleby, but he saddles a very interesting newcomer in division two. Dubai Legacy is a son of American sire Discreet Cat and has been working very well enough in his preparatory work to see off Charlie Hills’ well regarded Artistic Rifles. Bin Suroor is excited by his two-year-old crop and this one could be among the best of the lot.

Urbino, a stablemate of Melting Dew, has produced two very respectable seconds so far this season, and can enjoy a change of luck in the Betfred Watch Sky Sports In Our Shops Handicap. Both came over a mile and a half, and his performance behind a useful looking prospect in Stream Of Stars in an Ascot maiden last time suggests he may be handily weighted for what looks an advantageous step up to a mile and six furlongs.

Ed Walker has his team in good nick and he could strike with Glorious Army in the Betfred ‘Supports Jack Berry House’ Handicap. This one was a shade disappointing on his latest start over this course and distance, but has some decent maiden form on the all weather and looks worth another chance on a faster surface.

However, Mootasadir goes well for Hugo Palmer and is expected by many to extend his unbeaten sequence to three. He earns narrow preference with the pair expected to fight out the finish.

Finally, Michael Bell’s Flying Sparkle looks the answer to the Dribuild Construction Novice Median Auction Stakes at Chepstow. This one ran well on his return behind a horse who has continued to progress since, and looks to have been found a nice opening.

editor - April 13, 2018
0
AINTREE 1.45 GET ahead of the Games in the Alder Hey Children’s Charity Hurdle. SPIRITOFTHEGAMES has been placed in some of the hottest handicap hurdles run...