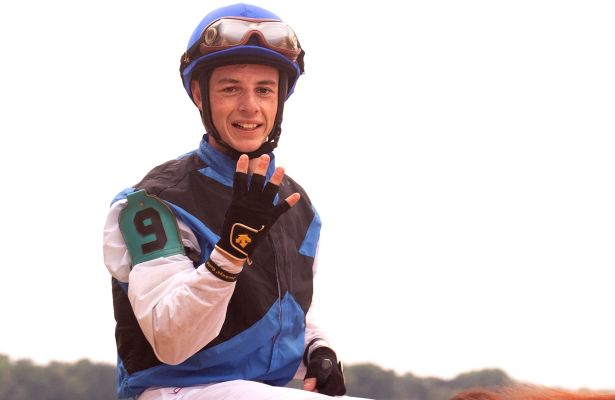 There’s a strong tradition, both in his family and on his circuit, which preceded Weston Hamilton when he began riding professionally last December – one the newly minted journeyman is poised to continue.

Hamilton, who turned 20 Nov. 19, rode for the last time as an apprentice Dec. 21, winning on two of his five mounts at Laurel Park to give him 118 victories this year with the weight allowance, tops in the country. His $3.43 million in purse earnings ranked second.

“It’s such a blessing and an honor to be riding, and I want to thank everyone that’s given me a shot and all the trainers and good horsemen that I’ve been around and have pushed me to get better,” Hamilton said. “It means the whole world to me to be leading right now.

“Not just to ride, but to be leading is kind of mind-blowing to think about. I never thought I’d be coming this far,” he added. “I’ve really been improving and working on a lot of things and it’s all going my way. It’s all coming together. We’ve been riding for some really good trainers and I’ve had some great experience. I’ve been having the time of my life.”

Hamilton is the youngest son of Steve ‘Cowboy’ Hamilton, a popular and successful rider in Maryland over three different stints dating back to the early 1990s. Though sidelined since mid-June with a back injury, the elder Hamilton owns nearly 1,400 career wins and is a two-time meet champion at legendary Pimlico Race Course.

“I couldn’t be prouder,” Steve Hamilton said. “I don’t think anybody could be more proud to see their son do what he’s doing and have the success he’s having with his work ethic and his attitude about things. We couldn’t be happier for him.

Born in Maryland but raised in Steve Hamilton’s native Oklahoma during the first of his two breaks away from the game, Weston Hamilton learned to ride and care for horses both from his father and under the tutelage of Frank ‘Goree’ Smith, owner and operator of the famed Elloree Training Center in South Carolina and brother of Laurel-based trainer Hamilton Smith.

Hamilton won his first two pro races Dec. 11, 2017 at Laurel, his only mounts on the card – the breakthrough victory coming on a 5-year-old mare named I Just Wanna Win. He finished the year with eight wins and $141,766 in purse earnings from 49 mounts.

His 2018 season got off to a strong start when Hamilton battled for leading rider at Laurel’s winter-spring meet before winding up second in both wins (46) and purses ($1.18 million). After going three-for-35 during the 12-day Preakness Meet at Pimlico, Hamilton tied for second in wins (25) and ranked fifth in purses earned ($844,013) at Laurel’s summer stand.

Hamilton entered the final two days of Laurel’s calendar year-ending fall meet tied for fourth with 31 wins to go along with $918,523 in purse earnings. He had 105 wins overall at Laurel and Pimlico in 2018, second only to Jorge Vargas Jr. (109).

“When I first started, if a horse didn’t run too great and it was because of me being green and not really knowing exactly how that horse should have been ridden or what he wants, I had to work on just staying positive and not get angry and move on to the next one,” Hamilton said. “You have to keep a clear mind and stay positive and confident.

“Confidence is the main thing. I’ve been on some horses where it’s not their day and you have to stay positive and keep riding hard,” he added. “My dad has taught me so much. I try to watch and learn from every jockey in the room everywhere I go. I’ve been adding a few things here and there.”

Hamilton continues to lean on his primary inspiration and mentor for advice and tips, going over his performance on a daily basis.

“We’ll watch the races and he’ll come home and ask me what I think,” Steve Hamilton said. “Sometimes I have something to say and sometimes I tell him I don’t think there’s anything he could have done different. I just tell him, ‘Keep your head up and keep on truckin’, and focus on staying positive and staying healthy.”

Weston Hamilton escaped injury Dec. 20 at Aqueduct, walking away from a scary two-horse spill in which veteran rider Jose Lezcano suffered a fractured nose when his horse broke down. Steve Hamilton accompanied his son to New York that day.

“When I’m here at the house, the TV’s on and I’m watching the races and watching him, No. 1 to make sure he gets around there safe every time,” Steve Hamilton said. “The other day in New York was a scary deal. I was there with him and I’m just glad he’s OK. Even Jose was very fortunate.”

Wes Hamilton has supplemented natural talent with a work ethic gleaned from watching his father. Entering his journeyman debut he had 894 starters, tops among all apprentice riders, and frequently splits his mornings between Laurel and Pimlico.

“You have to work hard in this game. Probably every month or so, I’ll take a day off. I’m usually out there every day,” Hamilton said. “If I don’t have horses I’m working, I’m coming to Laurel first thing in the morning and seeing all the people I need to see, then I head to Pimlico to scrape up some mounts and try to get on something in the morning – gallop, breeze, anything I can do for anybody.

“A lot of mornings I’ll go to Laurel and breeze quite a few horses, anywhere from four to six or seven, and then go to Pimlico for after the break down there and get on two or three and then come back,” he added. “I usually have quite a few during the races, so there’s days when I’m getting on 15 horses a day sometimes. I’m putting in some hard work and it’s really paying off.”

Represented by agent Simon Purdy, Hamilton is well aware of the challenges greeting riders when they first lose their weight allowance and is determined not to let it affect his outlook or performance.

Thewayiam Racks Up Third In A Row With Herecomesthebride Victory –...