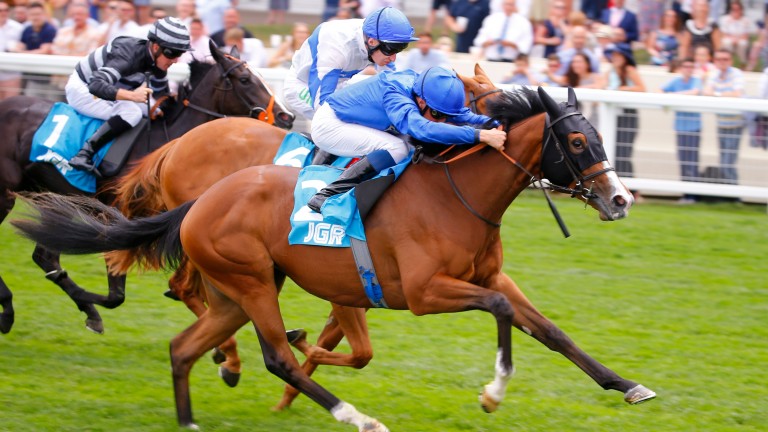 Successes at the highest level have come with increasing regularity for Charlie Appleby and Godolphin in recent years and the trainer is bidding for a third consecutive Marcel Boussac with Ceratonia.

Wuheida and Wild Illusion, Appleby’s previous two winners, went on to bigger things, with Wuheida becoming a Breeders’ Cup winner before injury intervened and led to her retirement.

Last year’s winner Wild Illusion claimed the Nassau Stakes at Goodwood on her most recent start and bids for another Group 1 on the Arc card in the Prix de l’Opera Longines.

Ceratonia is a half-sister to Wild Illusion and she made a winning start at Ascot in July before finishing second to Rocques, who reopposes, last time out in the Group 3 Prix d’Aumale at Longchamp.

Assessing her chances, Appleby said: “She’s got a similar profile to her older half-sister. She’s had the experience of going to Longchamp and she would appreciate some cut in the ground. We’ll remove the hood this time to make her a bit sharper. A repeat of her best form would make her competitive.”

The unbeaten Rocques heads the market for trainer Fabrice Chappet.

Successful on all three previous starts, including when beating Ceratonia by a comfortable three-parts of a length, she looks very useful.

Bruno Barberau, racing manager to Gerard Augustin-Normand, owner of Rocques, said: “She is unbeaten and has got this far without having had too hard a race in the Aumale. This is a Group 1 with more serious opposition. Cristian [Demuro] worked her last Monday and felt that she was as good as ever and, importantly, that she was a fresh horse.”

The Saeed Bin Suroor-trained Dubai Beauty gives Godolphin another chance and she will be bidding to return to form after a disappointing showing at Doncaster when favourite for the May Hill Stakes, finishing seventh.

Bin Suroor said: “We couldn’t find any reason for her disappointing run, but she’s in good form and we will send her back to the races and give her another chance.”

Before Appleby’s brace of successes in the Boussac, Aidan O’Brien won the race for two years running with Ballydoyle and Found. This time the trainer relies on Pink Dogwood.

The daughter of Camelot won for the first time at Gowran Park on her latest start, scoring by seven lengths, but takes a big rise in class.

O’Brien said: “She’s progressed with every run and won her maiden very nicely at Gowran Park last time. We’ve been happy with her since and we think she is ready to step up.”

Star Terms finished ahead of Dubai Beauty in the May Hill when runner-up and she will be bidding to give trainer Richard Hannon a first success in the race.

Matematica, on the other hand, is bidding for a first career victory as she has just her second start on the track having finished second on her debut at Longchamp last month.

Her trainer Carlos Laffon Parias said: “It is a slightly daring plan to run her but I am treating it as though she won first time. I had always thought we’d come to the Boussac if she won on debut and so a nose doesn’t change anything. I think plenty of her and there aren’t many Group 1 opportunities.”

Leopardstown: Apple’s Jade eases to victory in the Christmas Hurdle as...