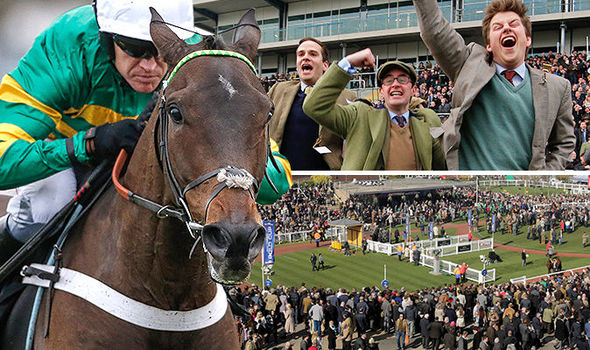 Buveur D’Air romped to victory in the feature race on this day last year as a 5/1 shot, streaking home by four-and-a-half lengths.

And he is an odds-on favourite to do so again in 2018, with last time’s runner-up My Tent Or Yours and veteran Faugheen expected to lead the chasing pack.

But all horse will be hoping the ground does not run as slowly as expected – for the first time since 1982, the ground was declared heavy, soft in places on the opening day of the Festival after a month of poor weather in the UK. 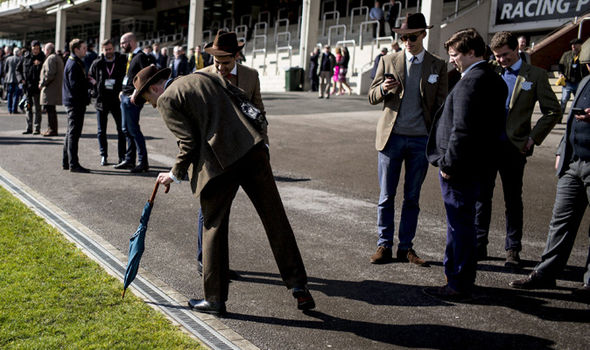 Cheltenham punters arrive ahead of the first day of the Festival

2.57pm: It comes down to Coo Star Sivola and Shantou Flyer over the last but the favourite looks so much stronger, only for the Richard Hobson-trained horse to rally over the final furlong, closing fast… but beaten by a head!

2.50pm: As the horses head to the start with Coo Star Sivola starting as a 5/1 favourite. Vintage Clouds has been tipped widely and is the first to show with Shantou Flyer and Yala Enki also taking close order.

2.30pm: No rest for the wicked with the Ultima Handicap Chase coming up in 20 minutes. Nice big field after just five runners in the Arkle. 18 will start the Ultima with Coo Star Sivola, heavily tipped, going off as favourite. The Scout is in good company with his pick, clearly.

“COO STAR SIVOLA has a great chance under Lizzie Kelly, who has had a fantastic season so far. Her mount produced a career-best performance when storming home by 14 lengths at Exeter last time out. Hard to know what he beat that day, but he is definitely on the upgrade.

There are dangers aplenty in this big field and each-way punters could be well served by supporting Gold Present, who won a Listed race at Ascot last time.”

2.15pm: Footpad makes a serious mistake with seven to jump but recovers well and closes from 15 lengths back to within two of the leader Petit Mouchoir. Ruby Walsh takes him into the lead over the last and never looked back, streaking home win the Arkle by a distance.

Willie Mullins in the ring reiterates his pre-race assertion that this is a Gold Cup horse. On that showing, you’d think so. 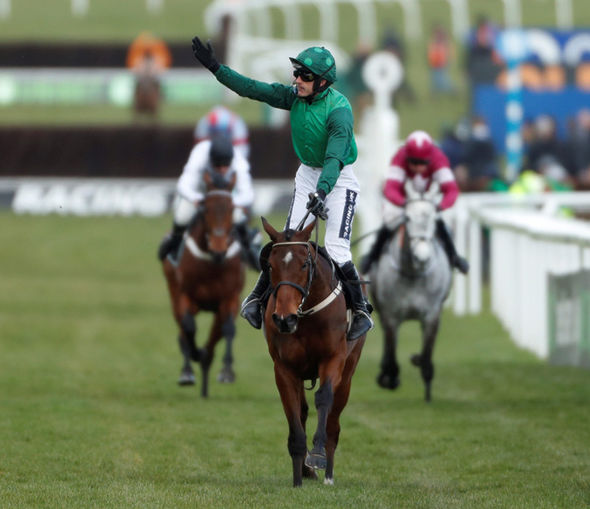 Ruby Walsh celebrates after winning the Arkle on Footpad

2.10pm: They’re off in the Arkle and Petit Mouchoir and Saint Calvados lead them out, with the former winning the battle for the lead with 11 to jump.

2.05pm: The Scout reckons the favourite should come in here. Quick turnaround for Ruby Walsh of course after riding an unplaced favourite in the opener.

“FOOTPAD can take this prize back to Ireland for the Mullins-Walsh partnership. After a near-200-day break he has run up a terrific sequence of three wins, improving for each run.

“Ended his pre-Cheltenham campaign with a decisive defeat of Petit Mouchoir in the Grade One Arkle Novice Chase at Leopardstown, where he came home five lengths clear of that rival under tender handling from Paul Townend. Petit Mouchoir was no match for him that day and it might be left to the improving Saint Calvados to chase Footpad home.”

2pm: Footpad is the favourite for the Arkle Challenge Trophy Novices’ Chase with Ruby Walsh on board – his dad Ted is pretty confident that this is the race for him.

“The horse has done everything right this year. Both Footpad and Petit Mouchoir [trained by Henry de Bromhead] are Grade One winners over hurdles. Both jump and both stay; it’s a toss-up between the two of them.”

Willie Mullins isn’t short of praise for the six-year-old either.

“He could be a Gold Cup horse one day,” Mullins said.

“We don’t have any problem with him staying, although with his natural method of jumping, he could be a Champion Chase horse.” 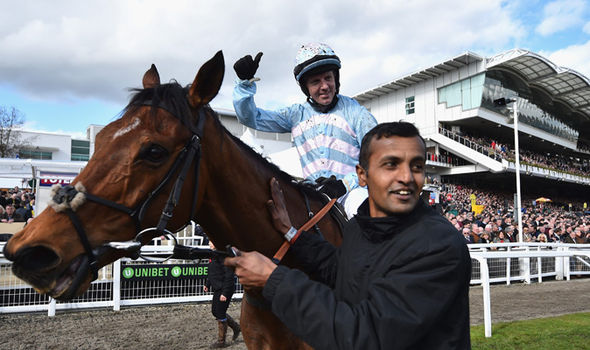 1.45pm: What race that was. Summerville Boy wasn’t really in it over the first half but finished like a train despite a terrible jump at the last. Had he produced a better clearance, he would have won it by four or five lengths. That’s a 9/1 shot, and I can reveal that this blogger had a piece of it. Big smiles back in the office.

The Arkle is coming up at 2.10pm. Ruby Walsh is on the favourite again.

1.37pm: Getabird leads most of the way before Kalashnikov takes the lead over the second last and led over the last. Noel Fehily on Summerville Boy improved on the inside after a good trip and despite taking the last poorly, stormed home to win by a neck! 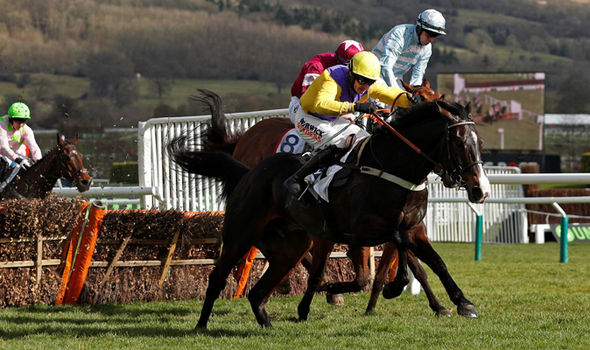 1.32pm: We’re off! Getabird leads them out with First Flow following close behind…

1.28pm: Getabird briefly drifted to 2/1 but looks like he will go off as a 15/8 favourite. Ruby Walsh looks relaxed and delighted to be on such a strong horse first up, especially after just a week back in the saddle after breaking his leg.

1.10pm: In need of a tip for the first race? Yes? Oh okay. Here’s The Scout with his assessement of the situation.

“KALASHNIKOV can get the meeting off to an explosive start for punters. Amy Murphy’s runner won the Grade Three Betfair Hurdle at Newbury in scintillating style and that bodes well for a big run here even though he is now up to Grade One level for the first time.

“Kalashnikov is a really consistent type as his form figures of 11121 underline. Getabird, from the Willie Mullins’ winners factory, is a worthy favourite after winning a Grade Two at Punchestown last time out. Burst clear of his rivals that day and his turn of foot could be seen to good effect here.”

12.40pm: They are starting to stream into the course now – the fans that is – so I think it’s about time we started thinking about the first race.

The 1.30pm today is the Supreme Novices’ Hurdle and the list of previous winners is a bit of a who’s who of Cheltenham horses: Alferof, Douvan and Altior have all won it in the past and Ruby Walsh has been on board for four of the last seven winners.

He has the favourite again this year: Getabird has a 100 per cent record from four races and handled heavy ground at Punchestown well on his last two outings. 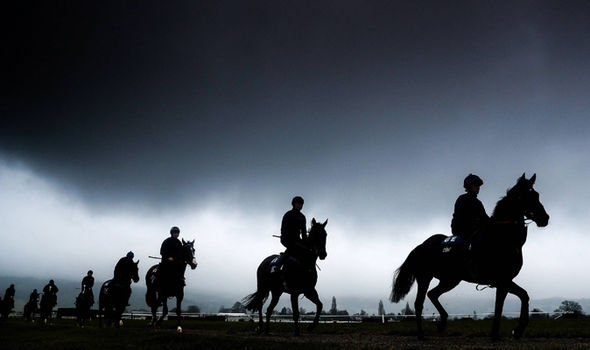 Cheltenham weather forecasters have promised no rain on Tuesday, despite overcast conditions…

12pm: If jockeys is your thing, then the likes of Ruby Walsh, Nico De Boinville and Noel Fehily probably float your boat – Leighton Aspell could tempt you too, having won two Grand Nationals, but you’d be surprised by his Cheltenham record. In 52 rides, Aspell has never bagged a Festival winner.

You can read his full Cheltenham story here – including what happened when he was on board Many Clouds last year, who died shortly after winning in a winter meeting at Cheltenham.

In the meantime, it’s brightening up on the course. The grey blanket of cloud has given way to big broken ones with grey underbellies but white toupees – and the sun is starting to peak out between them. It’s almost spring!

11.30am: Is it about the horses? Is it about the jockeys? Maybe you think it’s about the trainers. If so, you’ll be interested in Chris Goulding’s look at the three big names at Cheltenham: Nicky Henderson, Gordon Elliott and Willie Mullins. Read all about their battle here.

Elliott spanked them both last year but Henderson (58 winners) and Mullins (54 winners) are the old hands of this course. 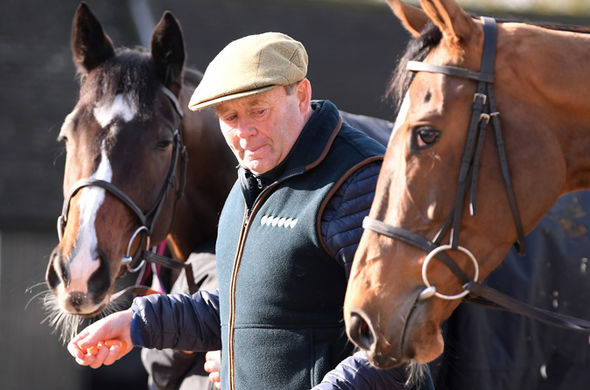 Nicky Henderson is the most successful Cheltenham trainer of all time

11am: If you’re not heading up to the Festival, you’ll probably either be following our live blog or watching on TV. And you’ll be disappointed to hear that ITV have binned their thermal camera as anchor Ed Chamberlin explains.

“I’m afraid our thermal camera won’t be returning after causing an internet sensation last year by showing horses getting too warm, and especially perhaps a little bit too much of an inside track on one groom’s minimal underwear.

“Despite the lack of thermal cameras our viewing figures on ITV are already 18 per cent up on this time last year so we enter the Festival in good shape.”

10.30am: Got some betting to do today? Who hasn’t. The Daily Express’ resident tipster is Britain’s BEST tipster (it’s official) and here are his picks for the day.

To read his full reasoning, check out The Scout’s Cheltenham tips in full.

Also, I have to report another non-runner. Verdana Blue doesn’t fancy the ground and Nicky Henderson has pulled him out too. 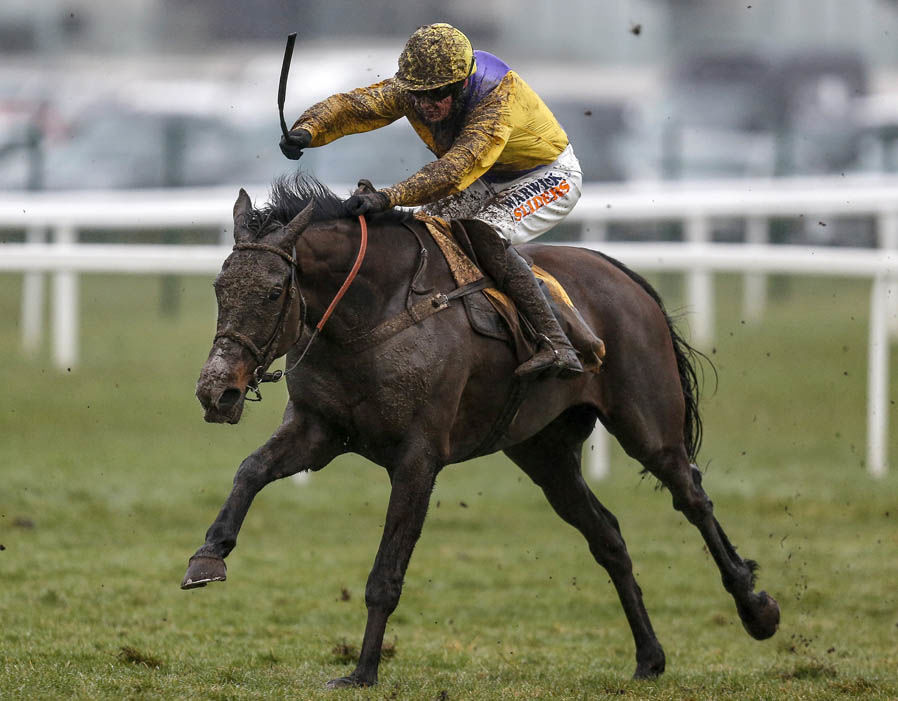 10am: More good news, this time regarding tomorrow’s Queen Mother Champion Chase. Favourite Altior woke up lame on Monday morning but after a day of treatment, Nicky Henderson seems confident he will run well after waking up better on Tuesday.

“Pleased to report that Altior is perfectly sound this morning so it’s all systems go for him in the Champion Chase,” Henderson wrote on Twitter.

He’s an even-money favourite to beat Min and Douvan to the title tomorrow at 3.30pm.

9.30am: Good morning! And the best news I can tell anyone before we even start today is that it is NOT raining. There are some heavy dark clouds in the sky but they look pretty high and the forecast is for them to clear off by lunchtime, so the first race might even start in sunshine. Optimistic, I know.

Wellies might till be in order though: the ground is officially heavy, soft in places despite a dry night. That will make life a little trickier for horses and punters alike I would have thought.

Four hours until the first race – so we’ll keep you up to date with tips, odds and news stories from Cheltenham until then.

Early non-runner in the feature race: Nicky Henderson’s second horse in the Champion Hurdle My Tent Or Yours has been pulled out on veterinary advice.

2019 Study on Historical Horse Racing: Examining the Potential of an...

Man places 3rd in the world for steer wrestling | Horse...