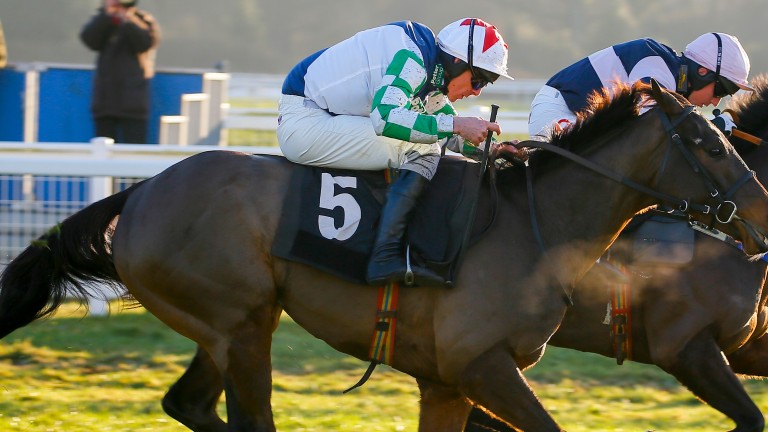 Christian Williams, who during his days in the saddle was unbeaten in three rides over hurdles on chasing legend Denman, is fast making a name for himself as a trainer.

Since the turn of the year, Williams, who is based in the Vale of Glamorgan, has sent out five winners and three seconds from just 13 runners at tracks as far-flung as Fakenham, Catterick and Sedgefield.

Potters Corner won for him at Wincanton on Boxing Day and returns to the track off a 7lb higher mark for the Somerset National, which with a prize fund of £26,155 is the most valuable contest of the day in Britain.

“He jumped very well last time and the ground won’t bother him,” said Williams. “We’ve waited for this race.”

The trainer added: “Potters Corner had 18 months off with a touch of leg trouble and we train him a bit differently to some. He has plenty of regular exercise on the beach.

“The horses are flying at the moment, so let’s hope it continues.”

Emma Lavelle, trainer of Gunfleet
He lacks a bit of experience but is a sound jumper who likes nice ground. He has a lot of weight to carry but looks an out-and-out stayer and it’s the right race for him.

Kim Bailey, trainer of Wandrin Star
He is enjoying a very good season and has won two handicaps at Bangor. I’m very happy with the way he’s been going at home.

Victor Dartnall, trainer of Dancing Shadow
He seems in good form. He ran well at Wincanton in the Badger Ales on his first outing of the season when he needed the run.

Jeremy Scott, trainer of Garrane
His form is pretty good. The horse who beat him at Chepstow [Glen Forsa] went on to win at Kempton on Boxing Day, while the horse he was second to at Exeter [The Two Amigos] has since won the Sussex National at Plumpton. I would have preferred the ground to be softer at Wincanton, but Garrane is well and the trip will suit. This horse stays well.

Tim Vaughan, trainer of Len Brennan
He lacks experience for a race like this, and I guess we’ve thrown him in at the deep end. However, he jumps nicely and the form of the Plumpton novice chase in which he finished a close third couldn’t have worked out any better. The winner [Ok Corral] won a Listed chase at Warwick on Saturday, and the second [Impulsive Star] won the Grade 3 Classic Chase on that same card. You couldn’t really find any better form than that. He’s up 5lb from Saturday, so it makes sense to run him. He’s fit and well, and I think he’ll be better going right-handed than left [like at Plumpton].

Charlie Mann, trainer of Like The Sound
He has been second in two of his three starts this season. He jumps well and stays all day. They say there is rain coming, which will suit him. I think he’s got a reasonable chance in what doesn’t look a great race.

Racing! The Answer Man is back in the house

editor - March 26, 2018
0
Hello, my name is John Cherwa and welcome back to our horse racing newsletter as we tell you what “alternate” means next...

The five most backed horses at Cheltenham today