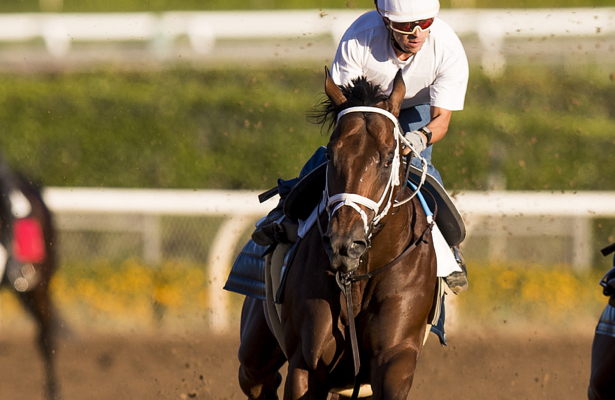 Hall of Famer Javier Castellano was up for the breeze, which saw the 5-year-old son of Quality Road go a half-mile in 47.26 seconds over a fast main track – fastest of 103 horses at the distance. Castellano is named to ride in the 1 1/8-mile Pegasus, the richest race in North America.

“I thought it was a very good work,” trainer Mike McCarthy said. “It looked like the horse got over the racetrack nicely. Javier was very pleased. He cooled out well and looks good.”

City of Light has now had seven works since his front-running triumph in the Breeders’ Cup Dirt Mile (G1) Nov. 3, which came with Castellano aboard. The previous six had come at McCarthy’s home base of Santa Anita Park in Arcadia, Calif.

“Javier worked him the week before the Breeders’ Cup, and I told him just basically a carbon copy of what we had then, and it was pretty much what I saw,” McCarthy said. “That’s more or less what we see from him all the time.”

Never worse than third in 10 career starts with five wins and $1.66 million in purse earnings, City of Light shipped to Gulfstream Jan. 16. He will retire to stud at Lane’s End following the Pegasus.

Likely Pegasus favorite and 2018 Horse of the Year finalist Accelerate put in his final breeze for the race Saturday at Santa Anita, going five furlongs in 58.80 seconds for trainer John Sadler, fastest of 35 horses. The Breeders’ Cup Classic (G1) winner is scheduled to arrive at Gulfstream Jan. 22.

“The track has a good bottom to it,” said Sadler, who had contemplated working Sunday had the surface not been to his liking after enduring 3 ½ inches of rain Monday into Thursday.

“It’s still got a little moisture in it and I wanted to go on Saturday all along. We got here and walked on it about four in the morning and felt it was pretty good, so cross your fingers and off we go.”

editor - October 24, 2018
0
The British Horseracing Authority is investigating claims that Ladies First, the beaten favourite for a race at Newcastle on 21 September, returned a...

Del Mar horse racing stewards have a referee’s job like no...