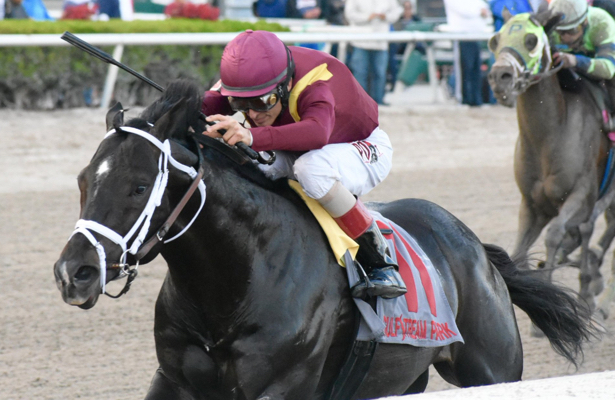 Trained by Todd Pletcher, the 4-year-old son of Stay Thirsty was the beneficiary of a perfect trip under Hall of Fame jockey John Velazquez.

After breaking from the far-outside No. 11 post position, the 8-5 favorite stalked the early pace set by Kroy and pressed by Belle Tapisserie past fractions of 22.38 and 45.31 for the first half mile. Coal Front advanced three wide on the far turn and moved to the lead past a tiring Kroy at the top of the stretch. Storm Advisory made a rail bid in the stretch but had to settle for second under Robby Albarado, 1 ½ lengths ahead of Heartwood and jockey Irad Ortiz Jr.

“It ended up being perfect out there with so much speed in the race,” Velazquez said. “I let him do his own thing out there, relax well outside horses and when I asked him he was there for me.”


Coal Front, who tired badly to finish fifth in the Nov. 3 Bold Ruler (G3) at Aqueduct, ran seven furlongs in 1:23.16 to collect his fifth victory in seven career starts.

“We were happy we drew the post that we did. Last time at Aqueduct he drew the one hole going a demanding distance in his first start off a layoff. He got in a speed duel that day and the track was very deep and tiring. It’s hard to win in those scenarios off that long of a layoff,” Pletcher said. “We’ve targeted this race since then and he’s trained as well we’d hoped he would have – actually, as well or better than ever – and got the trip we were wanting today.

“To be honest, I’d be really disappointed had he not performed well today based on the way he’s been training.”

Before going to the sidelines, Coal Front won the Amsterdam (G2) at Saratoga and the Gallant Bob (G3) at Parx. Although he has excelled at sprint distances, Pletcher isn’t convinced that the Kentucky-bred colt is strictly a sprinter.

“The things he’s been showing us training and the way he ran today and galloped out, I think he’s wanting to stretch out,” Pletcher said. “We’ve got to see if that’s a mile or two turns. We’ve got all kinds of options.”

Your top pinstickers’ guide to the Group 1 contest at Epsom

editor - June 2, 2018
0
GO into Derby battle with SAXON WARRIOR on your side. Aidan O’Brien’s ace completed a hat-trick of wins with victory in the Racing Post...

Horse Racing: Preview of the $750,000 Delaware Handicap and more