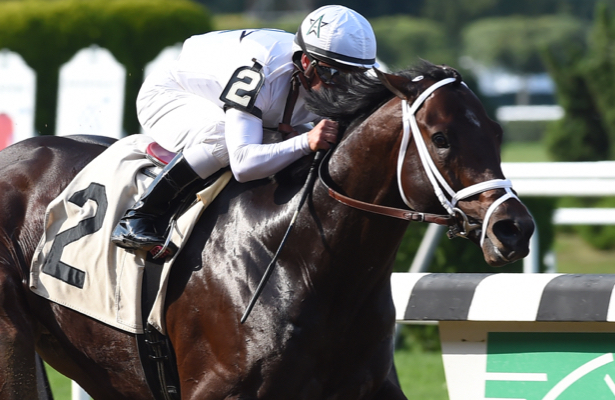 Trained by Todd Pletcher for an ownership group closely resembling the one that campaigned 2018 Triple Crown winner Justify, Copper Town will be making just his fifth career start over the space of two and a half years, and his first in the graded stakes ranks, when he contests the Grade 1 Cigar Mile.

Despite the unusual trajectory of his career, Copper Town has remained steadfast in his ascent to graded stakes contender. His racing odyssey commenced with an inauspicious debut on February 25, 2017, at Gulfstream Park, when he finished second beaten three lengths, and the effort was immediately followed by a lengthy hiatus from the track.

Making his next start nearly seven months later, a completely different Copper Town showed up on September 10 at Belmont Park, already well into his sophomore season. The son of Speightstown blitzed a field of six other maidens, defeating eventual Grade 2 winner Backyard Heaven by 3 ¾ lengths in the process. For an encore, he upped the ante with another gate-to-wire score on October 7 at Belmont, this time prevailing by 6 ¼ lengths over fellow Cigar Mile entrant Patternrecognition, but again the star-crossed bay was forced to hit the sidelines, this time for more than a year.

When he again resurfaced, on October 13 of this year at Keeneland, the Pletcher trainee picked up right where he left off, waltzing to a five-length victory over second-level optional claiming foes as the 3-5 favorite.

“He was a very forward horse and did everything right from Day 1,” said Pletcher’s assistant, Byron Hughes. “We were always high on him and he definitely did not disappoint us. His morning workouts transferred over to the afternoon. He hasn’t done anything wrong for us.

“He ran very well in his comeback, especially coming off the pace the way he did,” Hughes added. “He’s trained well heading into the Cigar Mile, so we’re expecting another big race from him. It wasn’t necessarily the plan coming into the year, but it worked out timing-wise and, given how impressive he was off the layoff, we thought that he would definitely be able to step up and take on this level of competition.”

Working in Copper Town’s favor on Saturday is the current hot streak the Pletcher barn is on, as well as the trainer’s past success in the Cigar Mile. As of November 29, Pletcher sits tied atop the trainer standings for the Aqueduct fall meet with 11 wins from 41 starters – a noticeable turnaround after a slow middle portion of the year by the prolific horseman’s standards – and he has won the prestigious one-mile dirt event four times, starting with Left Bank in 2001.

“We didn’t exactly have our best Saratoga meet, that’s for sure, but we had a solid Belmont fall meet and we’re having a good meet right now, so hopefully we can close it out on Sunday and get the win here,” said Hughes.

editor - November 1, 2018
0
Warrior's Club wins the Commonwealth Stakes at Keeneland in April 2018.(Photo: Coady Photography/Keeneland)It would have been a great problem to have, as Gary...

Kilbricken Storm out to continue upward curve at Newbury

Our Century and Exoteric to fight out Christmas Cup favouritism