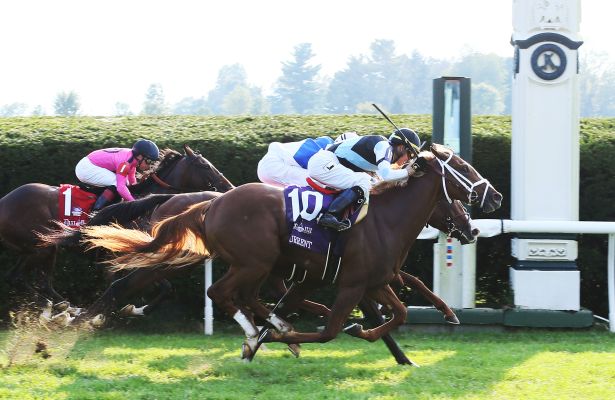 A trip to the Breeders’ Cup was on the line
in Keeneland’s Grade 3, $250,000 Dixiana Bourbon
Stakes, and the Sunday feature
came down to a photo finish. Running on the outside, Current got the head bob over Henley’s Joy for the fees-paid trip to the Nov. 2 Juvenile Turf at Churchill Downs.

“He’s been training very professionally. We’ve really thought a lot of this horse,” DePasquale said. “Todd thought he had a good future. So he sent him here and, of course, he was
right. We’re really happy about today.”

Current was third on debut at Saratoga behind Fog of War, who went on to win
the Summer Stakes (G2) at Woodbine. The Curlin colt then stretched out to a
mile to break his maiden at Belmont Park.

War of Will, second in the Summer Stakes, attempted to break his maiden in the Bourbon, setting fractions of 23.59, 48.82 and 1:14.30. Henley’s
Joy was a few horses back ahead of Salvator Mundi while Current sat in the back
half of the field under jockey Jose Ortiz.

After a lengthy examination, Current was
declared the winner over Henley’s Joy, Salvator Mundi and War of Will. The 1 1/16 miles went in 1:45.10.

“When we straightened for home, I felt like he started running,” Ortiz said. “I put him in the clear, but when I hit him left-handed, he drifted out in the two or three path.
But he was running. Inside the eighth pole to the wire, I was hoping I’d get there. It was so close, I didn’t know if I had it. He broke OK. He was very relaxed the whole time, and that’s the point, get your horse to relax. He kicked home very well.”

Current, bred by Hinkle Farms, is owned by
Eclipse Thoroughbred Partners and Robert LaPenta. He
was a $725,000 purchase at the 2017 Keeneland September Yearling Sale.

Every injury suffered by Ruby Walsh in horse racing after Mullins...