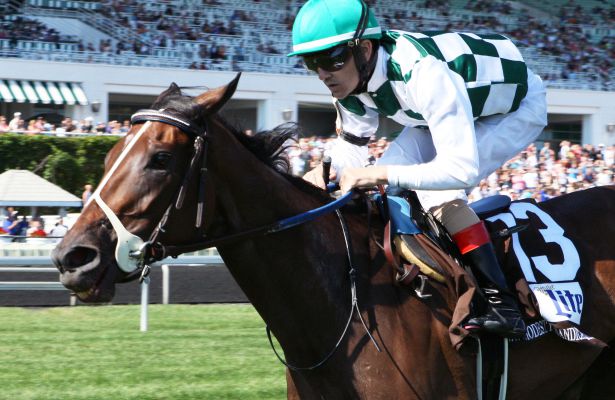 Trainer Kenny McPeek is confident in his graded stakes winner Daddys Lil Darling as she points toward the Grade I $600,000 Beverly D. at Arlington International Racecourse on Saturday, Aug. 11. The 1 3/16-mile event for fillies and mares over the turf is a “Win and You’re In” event for the Grade I $2,000,000 Longines Breeders’ Cup Filly and Mare Turf at Churchill Downs on Nov. 3.

Owned by Nancy K. Polk’s Normandy Farm, the 4-year-old daughter of Scat Daddy held off a late charge from fellow Beverly D. possible entrant Prado’s Sweet Ride in the stretch of the Grade III Modesty Handicap at Arlington on July 7, which was her third start of 2018. Her two prior efforts were a runner-up finish in the Grade III Bewitch Stakes at Keeneland Racecourse and a third in the Grade II New York Handicap at Belmont behind Chad Brown-trained pair Fourstar Crook and Sistercharlie (IRE), who also are pointing for the Beverly D.

“She was good that day I think it was a good spot leading into this next one,” McPeek said of her Modesty Handicap triumph. “It’s supposed to be tougher, like any time you step up from Grade III to Grade I, but she’s done it before and I’m pretty confident coming in that this will be a good next spot and that she can do it again.”

Her lone Grade I victory took place in the Grade I American Oaks at Santa Anita on December 30 which was the final start of her sophomore campaign. Daddys Lil Darling most recently breezed half-mile in :50.00 over the turf at Keeneland on July 27 in preparation for her next start.

“Obviously you hope she ships up and back well, and that there’s enough pace in the race,” McPeek said. “Things have to set up for her and it’s no sure thing. Obviously it’s going to be a little tougher. She will continue to run without Lasix; most people don’t realize she doesn’t run with Lasix. I think she runs better without it she doesn’t need it.”

Hall of Fame jockey Mike Smith will be aboard Daddys Lil Darling. He will be looking for his first victory in the Beverly D. His best finish came with a second aboard Maxzene in the 1997 edition.

Markle joins the Queen for Christmas