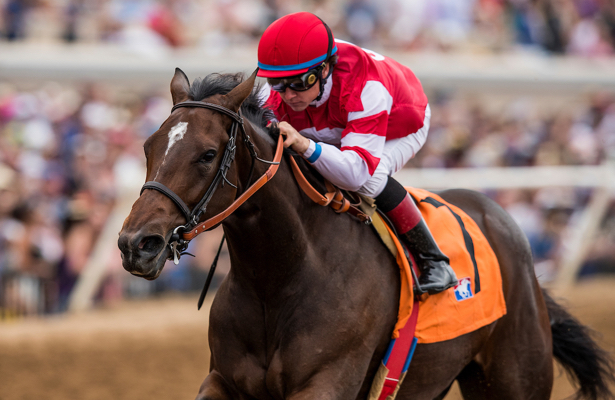 Nine stakes, among them two Grade 1s and two Grade 2s, with purses totaling $1,525,000, will be contested over the final six days of Del Mar’s summer meeting starting Wednesday.

An at-a-glance look at them and prospects based on nominations.

Generous Portion, Wednesday, August 29, $100,000 – A field of 12 was entered Friday. Recent debut winners here Creative Instinct and Give Me a Hint step up to the stakes level in the six-furlong sprint for 2-year-old Cal-bred fillies.

Del Mar Debutante, Saturday, September 1, $300,000 Grade I – The 2-year-old filly championship of the meeting won’t lack for quality but the numbers won’t be determined until Wednesday’s draw. Bob Baffert has Mother Mother, Der Lu and Chasing Yesterday; Jerry Hollendorfer has Brill and Simon Callaghan has Bellafina all coming off impressive wins here.

John C. Mabee, Saturday, September 1, Grade II $200,000 – Eighteen nominations for the 1 1/8-mile turf test for older fillies and mares. Tom Proctor-trained Cambodia, who pulled off the Yellow Ribbon/Mabee double in 2017, will command attention trying to do it again.

Del Mar Derby, Sunday, September 2, Grade II $250,000 – Fourteen nominations, among them two fillies, for a race that will be drawn on Thursdayand usually determines the 3-year-old champion of the meeting. River Boyne has won five straight stakes in Southern California with the last being the Derby-prep La Jolla Handicap on August  5.

Del Mar Juvenile Turf, Sunday, September 2, $100,000 – Plenty of nominations (22) for an event that can provide encouragement toward trying the $1 million Breeders’ Cup Juvenile Turf in November at Churchill Downs.

With a win aboard Painting Corners ($8.60) in Friday’s second race, defending champion Flavien Prat moved to within two (28-26) of Drayden Van Dyke in the jockey standings.

Van Dyke, who had racked up nine wins in a span of two days on Sunday and Wednesday, was blanked for a second straight day, extending his streak to 0-for-11.

Prat is serving the final day of a suspension Saturday. His lone scheduled mount will be aboard Battle of Midway in the “designated” Grade II $200,000 Pat O’Brien Stakes.

Prat’s win on Painting Corners was victory No. 24 of the meeting for trainer Peter Miller, who has a comfortable nine-win advantage over his closest pursuer, Doug O’Neill, entering the final eight days of the meeting.

BRILL WORKS IN COMPANY FOR DEBUTANTE

Brill broke off three lengths behind stablemate Lesley’s Song and was a length and a half in front at the finish line, track clockers said. Lesley’s Song was timed in 1:00.60.

Breaking The Rules Does It All Right In Tropical Park Derby...