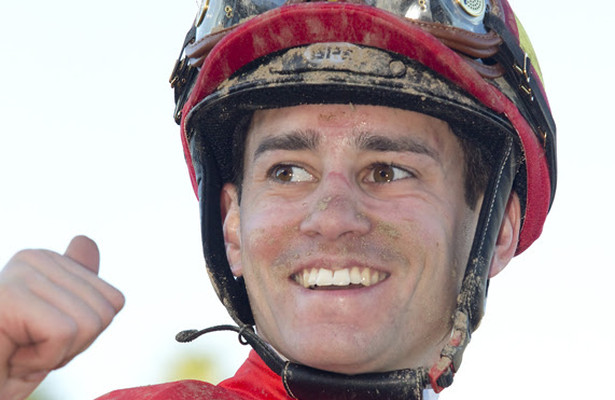 Lawson was unable to provide standard details of the baby’s weight and length, but was able, when put in scramble mode Wednesday morning, to provide Prat with a mount for Saturday’s Seabiscuit Handicap when Fly to Mars, who would have been among the favorites, was withdrawn due to injury.

Trainer Peter Miller said that Fly to Mars, a 4-year-old, California-bred Minister’s Wild Cat gelding, had wrenched an ankle. The injury to the Gary Barber colorbearer, who won the California Dreamin’ Stakes and was second in the Grade II Del Mar Mile last summer, will require a month or more layoff, Miller said.

With Fly to Mars out, Prat was booked to ride Holiday Stone for trainer George Weaver.

Drayden Van Dyke won two races on Sunday to move past Geovanni Franco into the top spot in search of a fall title to go with the one achieved at the summer meeting.

As the meeting enters its penultimate week, Van Dyke has eight wins. Franco, who led through the first two weeks, is one behind Van Dyke. With six wins each, Prat and Joe Talamo trail the leader by two while Rafael Bejarano and apprentice Heriberto Figueroa start the week with five wins each.

The 1 ½-mile marathon drew a field of eight.

Bigger Picture has raced eight times in 2018, all in graded stakes at distances of 1 3/8 or 1 ½ miles and recorded one Grade III victory, a second and two third-place results with earnings of $353,000 to boost his career earnings for Three Diamonds Farm to more than $1.3 million.

There are two horses with Hollywood Turf Cup experience. Chicago Style was second, beaten a neck by Manitoulin as the 7-5 favorite last year. Ashleyluvssugar was second as the 9-10 favorite in the 2016 race, beaten 3 ½ lengths by Texas Ryno.

A field of 13 was set for the Grade 3, $100,000 Jimmy Durante Stakes and 12 for the Grade 2, $200,000 Seabiscuit Handicap as entries closed and post positions drawn Wednesday for Saturday’s nine-race card which includes the stakes double-header.

The Jimmy Durante, which goes as the fifth race, is a mile on the turf for 2-year-old fillies. It attracted multiple entries from Peter Miller, Doug O’Neill and H. Graham Motion. Kentucky Derby-winning trainer Motion’s ship-ins Monette and Pivottina will be joined by fellow traveler Elsa. A Michael Stidham trainee, Elsa has been working at the Fair Grounds in New Orleans.

The Seabiscuit, scheduled as the seventh race, is at 1 1/16 miles on the turf for older horses. Hall of Fame trainer Jerry Hollendorfer has entered He Will, a 6-year-old California-bred son of Cyclotron, in a race he came up a nose short of winning with a late charge against Hunt in the 2017 running.

Stidham has shipped Grade III winner Synchrony in from New Orleans and Irish-bred Pincheck, owned by Del Mar Thoroughbred Club Director Jon S. Kelly, is in from the Emerald Isle for a U.S. debut.

editor - April 28, 2018
0
NOT the strongest of renewals for the Pat Taaffe, but it looks a good opportunity for Gordon Elliott’s SUTTON MANOR to land a...

The Latest: Idaho superintendent race too close to call