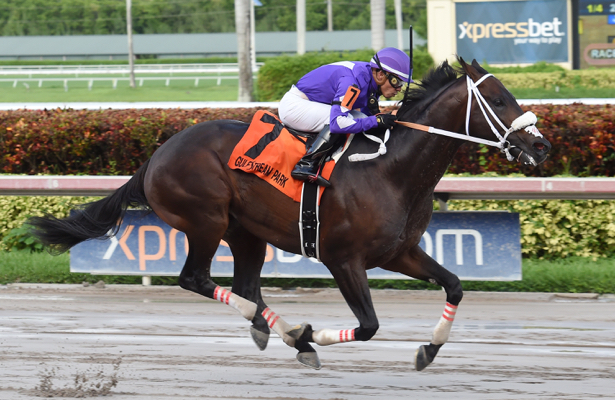 Bigger challenges are ahead of Ricardo Vallejo’s Deland in the aftermath of his overpowering triumph in Friday’s $75,000 Mo Exception at Gulfstream Park.

The Marathon Stakes presented by TAA, a Grade 2 race at 1 ¾-miles formerly known as the Breeders’ Cup Marathon, is scheduled for Nov. 2 at Churchill Downs. It’s a target for the 6-year-old son of Gottcha Gold, who drew off to an eight-length triumph in the mile stakes for 3-year-olds and up.

“The horse at the moment is in best possible condition. The owner would like to run on Breeders’ Cup Day in the Marathon race,” trainer Victor Barboza Jr. said. “It’s my opinion that he wants to run longer races.”

Deland, who notched his second straight stakes victory in a one-turn mile stakes, is a Grade 1 winner at 1 ¼ miles in Puerto Rico.

Deland pressed the pace set by longshot The Best Candy along the backstretch and into the far turn before taking over on the turn into the stretch and drawing off to a powerful triumph under Emisael Jaramillo. He ran a mile over a sloppy track in 1:36.97 while winning his 12th race in 22 starts. Hy Riverside finished second, 1 ¼ lengths ahead of Hy Kodiak Warrior.

In the $75,000 The Vid earlier on the program, One of a Kind ($5.60) captured his fourth victory in six starts since being claimed for $16,000, successfully transferring his sharp recent turf form to the sloppy main track in the 1 1/16-mile stakes originally scheduled to be run on grass.

Trained by David Kassen for Hickory Woods Farm, One of a Kind pressed the pace set by Diamond Bachelor into the far turn before assuming the lead on the turn into the homestretch. The 4-year-old son of Lemon Drop Kid received an outside challenge by favored Local Hero, the main-track-only entrant ridden by Tyler Gaffalione, but. One of a Kind held resolutely through the stretch to prevail by a neck over the 4-5 favorite.

Jockey Nik Juarez, who had ridden One of a Kind to victory in his first start for Kassen March 30, reunited with the Florida-bred colt, who ran 1 1/16 miles on a sloppy track in 1:45.25. Local Hero finished second, a half-length ahead of Diamond Bachelor.

editor - December 14, 2018
0
LIL ROCKERFELLER (12.45 Cheltenham) looks capable of achieving even more as a chaser than he did over hurdles after just three starts. His jumping...

First Foal Is A Colt For Ashford Stud’s Cupid – Horse...

Gronkowski preparing for US debut in Belmont Stakes