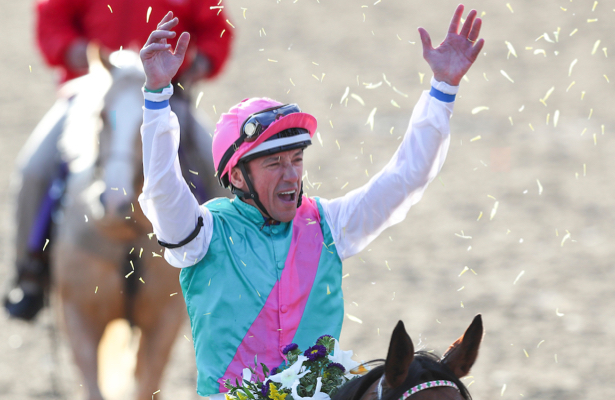 Frankie Dettori spent Wednesday in London collecting the 2018 Longines World’s Best Racehorse Award for Cracksman, who shared the title with Australian mare Winx. One of the world’s top jockeys will seek more hardware this weekend with mounts in both legs of the Pegasus World Cup Series.

Dettori is set to ride Mexico’s Triple Crown winner, Kukulkan, in Saturday’s featured Grade 1, $9 million Pegasus World Cup against Breeders’ Cup winner Accelerate and City of Light. The 4-year-old colt is 30-1 on the morning line and will be facing American horses for the first time at Gulfstream Park.

“He’s a longshot, but he’s unbeaten,” Dettori said after Wednesday’s ceremony inside London’s Landmark hotel. “The guys that paid the money, they asked me to ride it. It’s a challenge for me. I’m looking forward to it and I don’t know what to expect, but we’re going to give it a go.

“I’m very positive. His trainer’s very upbeat. If I tell you I’m going to win with a 30-1 shot you’d think I’d be crazy, but I’m going to try anyway. That’s for sure.”

Dettori said he has watched video of Kukulkan, who’s trained by Fausto Gutierrez for Cuadra San Jorge, before getting acquainted with the horse in person. Kukulkan has won all 14 career starts and took the Clasico del Caribe at Gulfstream Park by 10 1/4 lengths in his last race after sitting off slow fractions. He registered a 71 Beyer Speed Figure for the effort.

Accelerate’s latest Beyer Speed Figure from his Breeders’ Cup Classic victory was 105, and he earned a 115 in his Pacific Classic (G1) romp in August. Accelerate was rated the third best racehorse ahead of the Pegasus World Cup, where he is the 9-5 morning line favorite.

Both the Clasico del Caribe and the Pegasus World Cup are 1 1/8 miles.

Dettori will also be aboard Stronach Stables’ Delta Prince, a half-brother to champion Royal Delta, in the Grade 1, $7 million Pegasus World Cup Turf. Delta Prince broke through in stakes action last June when he made his seasonal debut. The horse hit the board in graded company before, but came out on top in Woodbine’s King Edward Stakes (G2). He lost the Fourstardave Handicap (G1) at Saratoga by a neck, finished fourth in the Woodbine Mile (G1), then third in the Bold Ruler Handicap (G3) on dirt at Aqueduct.

“I heard he’s training well. It looks quite open,” Dettori said ahead of the Pegasus World Cup Turf. “…I’m riding for the owners. The Stronachs have been supportive of American racing. Again, if I can get a piece of the pie, why not?”

Dettori is coming off a remarkable 2018 season with the mounts on Cracksman and Enable, the first horse to win the Prix de l’Arc de Triomphe and a Breeders’ Cup race in the same year. Asked about riding those top-rated horses, Dettori said:

“Well, let’s rephrase it. What’s it like riding for John Gosden? He’s a genius and a master.”

Gosden, the trainer, could not be in attendance at Wednesday’s Longines World’s Best Racehorse ceremony Dettori and owner Anthony Oppenheimer. But has been in the spotlight all season as the trainer of both Cracksman and Enable.

Cracksman opened 2018 by winning the Prix Ganay (G1) and the Coronation Cup (G1) before finishing second to Poet’s Word in the Price of Wales’s Stakes (G1). He came back in the Champions Stakes (G1) at Ascot for his career finale and secured an emphatic six-length victory.

“He can train the whole spectrum of the Thoroughbred,” Dettori said of Gosden. “And to be part of his team, Clarehaven, I’m very blessed.”