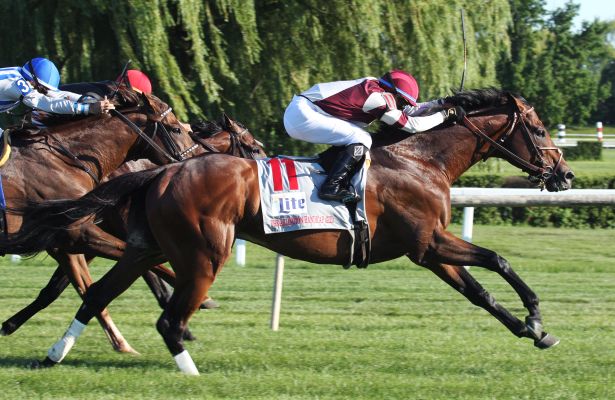 Owned by Gunpowder Farms, the 6-year-old son of Kitten’s Joy has logged one breeze since the Arlington Handicap when working a half-mile in 48.60 on Saturday, July 21 over the all-weather surface at Fair Hill Training Center.

“He’s working again (Friday) and he’s been doing great,” Rubley said. “We’re also nominated to the (Grade 1 $500,000) Fourstardave (at Saratoga on Aug. 11) as well so we’re still not positive on which direction we’re going just yet.”

Should he race in either spot, Divisidero would be attempting his third Grade 1 victory. He scored back-to-back wins in 2016 and 2017 in the Woodford Reserve Turf Classic at Churchill Downs on the Kentucky Derby undercard.

Divisidero was bred in Kentucky by Hinkle Farms and is the fourth foal out of the Lemon Drop Kid broodmare Madame Du Lac. He was purchased for $250,000 by Margaux Farm from the Keeneland September Yearling Sale in 2015 where he was consigned by his breeders.

Sire Kitten’s Joy is also likely to be represented by Oscar Performance in the Million. Owned by Amerman Racing and trained by Brian Lynch, he took last year’s Grade I Secretariat Stakes at the Chicagoland oval. He will look to join Awad (1993-1995), Marlin (1996-97), Kicken Kris (2003-04) and Beach Patrol (2016-17) as the only horses to score the Secretariat-Million double. Oscar Performance is out of Theatrical (IRE) mare Devine Actress and is a full brother to three-time graded stakes winner Oscar Nominated, who was eighth in last year’s Million.

The Arlington Million is a “Win and You’re In” event for the $4 million Longines Breeders’ Cup Turf at Churchill Downs on Nov. 3.