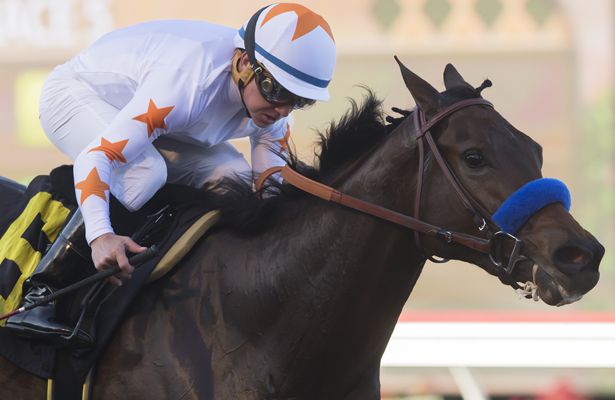 Owned by Phoenix Thoroughbred III, Dream Tree, a bay filly by Uncle Mo, has been idle since winning the Grade 2 Prioress Stakes at Saratoga by 4 ¼ lengths on Sept. 2.

With the Prioress serving as the lone exception, Dream Tree has been favored in four out of her five starts and will no doubt assume that mantle in the La Brea. A $750,000 Fasig Tipton March 2017 2-year-old in training sale purchase, she’s run to expectations and has trained well since her Prioress win on Sept. 2, evidenced by a solid half mile Friday morning at Santa Anita in 48 flat. Although ridden in New York by Mike Smith, Dream Tree will be reunited on Wednesday with Drayden Van Dyke, who guided her to her first four wins, including a 3 ¼-length score in her third start, the Grade 1 Starlet at Los Alamitos on Dec. 9, 2017. A three-time graded stakes winner, she was a nose victor in her only try at seven furlongs, the Desi Arnaz Stakes at Del Mar, on Nov. 18, 2017.

A prompt three-quarter length winner as the 3-5 favorite in a six-furlong allowance on Nov. 25 at Churchill Downs, this daughter of Distorted Humor pressed the early pace and finished sixth, beaten 3 ½ lengths two starts back in the Breeders’ Cup Filly & Mare Sprint going seven furlongs on Nov. 3. Based at Keeneland with Ward, this two-time graded stakes winner has been ensconced at Santa Anita with longtime Ward associate Blake Heap for the past month and has two five furlong works on her local tab, the most recent accomplished in 1:01.20 on Dec. 19.

A dazzling 2 ¼-length winner versus state-breds going seven furlongs in the Betty Grable Stakes at Del Mar on Nov. 11, this California-bred daughter of Smiling Tiger has been no worse than third in 11 of her 13 starts and she earned a career-best 91 Beyer Speed figure in her Grable victory, indicating she’s at the top of her game. Although the La Brea marks her initial foray into graded stakes competition, Spiced Perfection, who is 13-5-4-2 overall, retains the services of top jock Flavien Prat.

editor - March 20, 2018
0
THE Barbara Joseph-Paul Jones stable will make the four-hour trip from Canberra to Gosford on Wednesday hoping they’re driving in the rain.The pair...

Cheeky! Cheltenham racegoer takes a drink . . . from her...