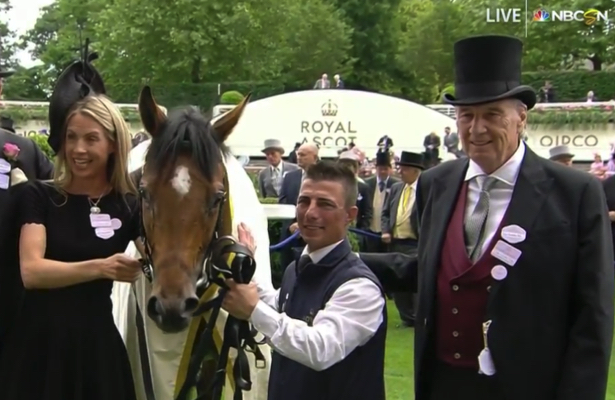 The fields are gradually forming for one of the top turf races in the world, the $6 million Dubai Turf (G1) on Dubai World Cup night. The grass feature got an added boost with the addition of another “possible” in John and Tanya Gunther’s Without Parole.

The Gunthers, a father and daughter team who also bred American Triple Crown winner Justify and are among the three finalists for champion breeder at the Eclipse Awards, are hoping that the lightly raced son of Frankel can prove to trainer John Gosden that he is worthy of a trip to the UAE.

“Fingers are crossed,” Tanya Gunther said. “Neither my dad or I have been to the Dubai World Cup, so it would be exciting if it happens. He’s doing well at the moment and Gosden will make the call in due course regarding whether he heads to Dubai.”

Without Parole shot onto the scene last June with a brilliant tally in Royal Ascot’s St James’s Palace Stakes (G1) — his first Group-level try in what was his fourth start. Thrown into the deep end, he finished off the board in consecutive Group 1 races behind the likes of Lightning Spear, Roaring Lion and Recoletos.

Victory on Dubai World Cup night would not be a surprise for his bloodline, as it were. His half-brother, Shadwell Stable’s Tamarkuz, won the 2015 Godolphin Mile (G2) with ease, as well as the Dubai World Cup Carnival’s Firebreak Stakes (G3) and Burj Nahaar (G3). The Gunthers also bred said eventual Breeders’ Cup Dirt Mile winner who now stands at Shadwell Stud in Kentucky.

Arguably the best card thus far of the 2019 Dubai World Cup Carnival will take place on Thursday night at Meydan Racecourse, including a top-class field assembled for the evening’s co-featured Group 2 $250,000 Al Fahidi Fort. Chief among the competitors is Australia’s Comin’ Through, who exits a run in the Hong Kong Mile (G1) at Sha Tin on Dec. 9 for Sir Owen Glenn’s Go Bloodstock and is one of the few horses to have the misfortune of facing both Winx and Beauty Generation in the past year.

A Group 1 winner in his native country, the son of Fastnet Rock will be the first Dubai starter for trainer Chris Waller, who famously also trains Winx. He has won seven of 23 starts, including a pair of stakes in 2018 — the Group 1 Doomben Cup over 2000m and Group 2 Tramway Stakes over 1400m. He returns to the latter distance for Thursday’s Al Fahidi Fort and faces a field that includes G1 winner Marinaresco and multiple G2 winners Championship and Janoobi. The winner of last year’s renewal, Jungle Cat, went on to win the 1200m Al Quoz Sprint sponsored by Azizi Developments (G1), as well as Australia’s Sir Rupert Clarke (G1).

“It’s been the plan for a long time to get to race in Dubai,” Waller said. “We’re very respectful of racing there and the importance of it on the world stage. Last year, myself and (Winx’s jockey) Hugh Bowman travelled there to have a look at the facilities and get an insight into the racing and we were extremely impressed. While we wish we had a greater presence there, as far as horses, it’s hard at this point because of the Australian season, but that doesn’t mean we won’t in the future.

“Comin’ Through is one step below the top 10 horses in Australia, but he’s very talented,” Waller continued. “There’s good prize money in Dubai and we enjoy the challenge of taking a horse like him overseas. It’s very exciting. He’s also owned by Sir Owen Glenn, who’s a man who likes to promote his breeding stock, is one of Australia’s biggest owners and is looking to get to a higher level, especially on the international level.

“The distance should be fine for (Comin’ Through) while he’s fresh. He’s had a number of good wins over it. While the (barrier nine of 13) draw isn’t perfect, we’ll see how the race is run on the night. He is a horse who keeps (trying) and is hard to pass.”

Comin’ Through is a half-brother to four-time Group 1 winner Criterion, who was second behind Winx in the 2015 Cox Plate (G1).

Quick Hits: American trainer Kenny McPeek will once again break new ground on Thursday when he starts as many as three on the card, including Argentine Group 1 winner Grecko in the $100,000 Al Bastakiya Trial. The 17-time Grade 1-winning trainer was the first U.S. conditioner to start as early as mid-January during the DWC Carnival, while also the first to start a turf horse when Harlan Strong finished sixth of 10 in the 2000m handicap last week. Harlan Strong wheels back for Thursday’s 2410m turf handicap, while the third McPeek entrant is Senior Investment, the top weight in the night’s 2000m handicap — a race that likely will bleed into the $160,000 Curlin Handicap on Feb. 28… American 3-year-old colt Tone Broke, who is one of the more experienced horses running in the Al Bastakiya Trial, will be Dubai World Cup-winning trainer Steve Asmussen’s first starter as early as January during the DWC Carnival. Previous DWC Carnival runners for Asmussen include Curlin, whose aforementioned Feb. 28 (2008) handicap race (a Dubai World Cup prep win) was renamed in his honor and Regally Ready, who was unplaced in the Nad Al Sheba Turf Sprint (2012).

editor - November 15, 2018
0
THREE meetings on the all weather with another two over the jumps makes it a busy day of racing this Thursday. We've got you...

Side with Monty at Kempton

Which American-based horses are running at Royal Ascot?