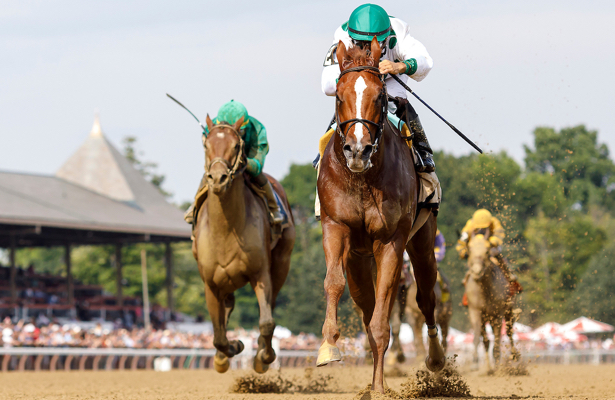 With two weeks until Breeders’ Cup Saturday at Churchill Downs, trainer Dale Romans is warming up to the possibility of Promises Fulfilled competing for two championships: one, the Breeders’ Cup Sprint, and the other the Eclipse Award that will likely go to its winner.

“We’re probably going to end up running in the Sprint,” Romans said after the son of Shackleford breezed a half mile in 48 seconds, making a slow track, still packed with moisture from overnight rains, look fast.

Owner Robert Baron was on hand for the breeze as connections also mull a start in the Breeders’ Cup Dirt Mile. At Churchill Downs, it also runs in a one-turn configuration.

“All things equal, I think he’d have a great chance to win in the Mile,” Romans said. “You’ve got to think about a lot of factors.”

The Sprint’s $2 million purse is double what the Dirt Mile offers. Romans also noted “the Sprint winner, unless it’s a real longshot, is going to be Sprint champion even if we do win the Mile, and that’s important. We would like to be champion.”

Promises Fulfilled checked another box on his resume last out, defeating older horses in Keeneland’s Phoenix Stakes (G2) in his final Breeders’ Cup prep. Since reinventing himself as a one-turn specialist following a try at the Kentucky Derby, the chestnut colt has also won Saratoga’s H. Allen Jerkens (G1) and Amsterdam (G3).

“He’s just a good horse. He’s easy to train — easy to be around,” Romans said.

Tammy Fox, Romans’ life partner who’s often in the irons for works, also said “Dak is back” when the well-regarded 3-year-old Dak Attack walked off following a half mile in 49.60. It was his first start since running second off the layoff — and against a distinct speed bias — in allowance company at Keeneland. The Ghostzapper colt could have Breeders’ Cup weekend options with pre-entries due Monday.

Under the radar: four horses who ran on Saturday worth following...