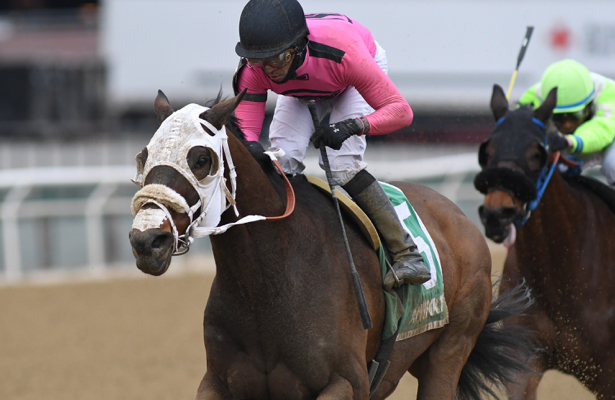 Gary Barber’s Solid Wager lived up to his name Saturday with a last-to-first rush to capture the 126th running of the Grade 3, $100,000 Toboggan Stakes at odds of 5-1 at Aqueduct Racetrack.

The 8-year-old Birdonthewire gelding, previously conditioned by Peter Miller, shipped in from California and made a tremendous Big A debut for new trainer Chris Englehart.

Leaving from the outside post in a compact field of five under Jose Lezcano, Solid Wager settled at the back of the pack in the seven-furlong sprint for 4-year-olds and upward as Skyler’s Scramjet, being stalked by Colonel Sharp and Gold for the King, marked the opening quarter-mile in 22.75 seconds on the fast main track.

Skyler’s Scramjet, who captured the Grade 3 Tom Fool here last year, maintained his lead into the turn through a half-mile in 45.81 as Gold for the King, the 3-2 mutuel favorite, loomed large in the three-path with Bal Harbour looking for a rail run.

Solid Wager, traveling wide late in the turn under Lezcano, was full of run down the lane as Skyler’s Scramjet put away the early challengers, but had no answer for the California shipper who earned a 1 1/2-length score in a final time of 1:23.95. Skyler’s Scramjet completed the exacta, 1 3/4-lengths the better of Gold for the King. Bal Harbour and Colonel Sharp completed the order of finish.

Englehart said he was pleased with the trip engineered by Lezcano.

“I thought it was a great race for him. He really got a great ride. Jose put him in a perfect spot throughout,” said Englehart. “Coming into the race we figured there might be a lot of speed for him to chase down and Jose really worked out a good trip for him where he could stalk and get the victory.”

Lezcano said that Solid Wager ran to his past performances.

“He’s a very nice horse and the race set up good for him. The first quarter went fast and after he was backing up a little. I asked him near the three-eighths to pick it up,” said Lezcano. “I had watched a few replays and it looked like he is more comfortable coming [off the pace]. He finished strong.”

The California-bred Solid Wager, a three-time winner of the Cary Grant at Del Mar, made the grade in the 2016 edition of the Grade 3 Midnight Lute at Santa Anita. He was making just his second start in New York, having previously finished eighth in the 2017 renewal of the Grade 1 Mohegan Sun Metropolitan Handicap at Belmont Park.

Englehart said Solid Wager, who joined the barn after a good third in an optional claiming event at Santa Anita on New Year’s Day, could make his next start in the Grade 3, $200,000 Tom Fool, a six-furlong sprint for 4-year-olds and upward, slated here for March 9.

“He’s been with us for about three weeks now. He shipped to us just after his last race at Santa Anita. I’ll certainly speak to Mr. [Gary] Barber and see where he’ll want to go following this win, but the Tom Fool certainly might be a good spot and one we’ll consider,” said Englehart.

How to watch the Derby: live stream horse racing from Epsom...