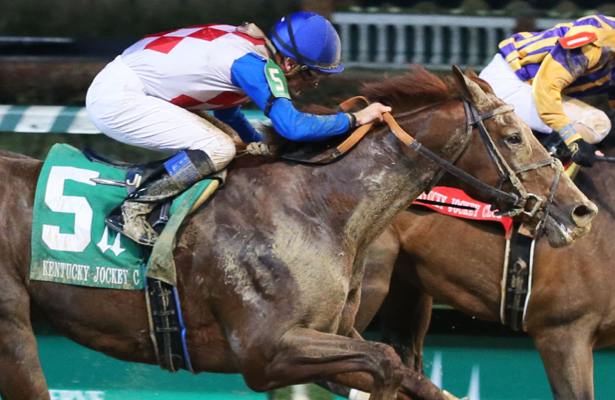 With Saturday’s Grade 2, $200,000 Lecomte Stakes regarded as a wide-open race, we gathered opinions from Horse Racing Nation contributors who have handicapped the 1-mile, 70-yard event at Fair Grounds. The Lecomte goes as Race 12 of 14, at 6:49 p.m. ET, and it will produce a new stakes winner on the 2019 Kentucky Derby trail.

Check out free past performances, and see our selections below.

Editor’s note: Picks were submitted before the Daily Racing Form reported Friday that Mr. Money will scratch due to sickness.

Analysis: Tackett has thrived since coming to Fair Grounds. He has won two straight, and Owendale, who Tackett beat in his last start by a neck, came back to win on Thursday. He has posted three straight bullet works and will have a ground saving trip. If he runs to his works, he can win. Mr. Money got into the superfecta in the Breeders’ Cup Juvenile. He has not raced since, but has grown and shown potential. He has strong works and should get a nice pace to run into. Class could help his chances. War of Will has a turf pedigree, but his maiden win on dirt was a sight to behold. Could be a wet track Saturday, which would greatly help his chances. He posted a sharp 59-second bullet two works back and is ready to go. Tight Ten had a troubled trip in the Breeders’ Cup Juvenile, but before that, he was first or second in three starts. He could part of the pace and has enough speed to hang, but will have to avoid a wide trip. I will play a 3-4-8-11 superfecta box.

Analysis: I’m taking a shot with Mr. Money here, as horses coming out of the Breeders’ Cup Juvenile have not disappointed in their subsequent starts. While I’m not sure how far Mr. Money wants to go as the season advances, this could be his shot for Derby points. If he stays at or drifts up from his morning line, bet!
Jarrod Horak, Pick 6 Blog

Analysis: Mr. Money tries to become the fourth next-out stakes winner from the Breeders’ Cup Juvenile. He shows two local bullets for this and figures to stalk the pace from an advantageous post position. War of Will raced on turf in his first four starts before switching to dirt and romping in the slop at Churchill Downs on Nov. 24. Plus Que Parfait exits a quality effort from off the pace in the Kentucky Jockey Club Stakes (G2). I like his running style versatility. Roiland exits a rallying fifth in the aforementioned Kentucky Jockey Club. He adds blinkers for this engagement and drilled local bullet for this on Jan. 5. The Plays: #4 to win, exacta 4/7-8-12, exacta 7-8-12/4, trifecta 4-8-12/ALL/7

Analysis: Tackett looks like he has a good shot in a competitive field. His last two races came at this distance and over this surface. The West Virginia-bred works well in the morning. Tight Ten didn’t run well in the Breeders’ Cup Juvenile, but he could bounce back here, as he had run two tough races prior to the championships. Surprisingly, War of Will ran well on dirt, despite his pedigree. Can he keep it going here?

Analysis: Plus Que Parfait ran a closing second by a neck to Signalman, who previously finished a close third in the Breeders’ Cup Juvenile. With another fast pace expected, his late run will receive another nice setup. If not Plus Que Parfait, War of Will is fast enough to win if he translates his sloppy track form.

Analysis: Plus Que Parfait ran a respectable second last time out, and I think he is going to improve off that effort. He fired a sharp five-furlong workout last week, and he is fresh and ready to run. Tight Ten and Mr. Money will have to prove that they can handle classy competition, but the distance should suit them well. I really like Roiland as a long shot. He has acted a little green in his past few races, as he hasn’t broke sharply or had a bad trip. He’s been training well, and I think he could possibly put the pieces together this weekend. He is trained by Tom Amoss, so he’ll be right at home in New Orleans.

Analysis: Mr. Money has been working sharp down at Fair Grounds since late November and improved with each start, beating Sham (G3) winner Gunmetal Gray when fourth in the Breeders’ Cup Juvenile after breaking his maiden. Plus Que Parfait nearly caught Signalman when rallying in the Kentucky Jockey Club over a sloppy track and was a gutsy maiden winner one race earlier. War of Will also has a nice string of local works, stakes experience on the turf, and showed a liking for dirt winning his maiden in the slop. You have to like Tackett’s two local wins at the Lecomte distance.

Spirit Of Boom may continue assault after​ Jonker’s win