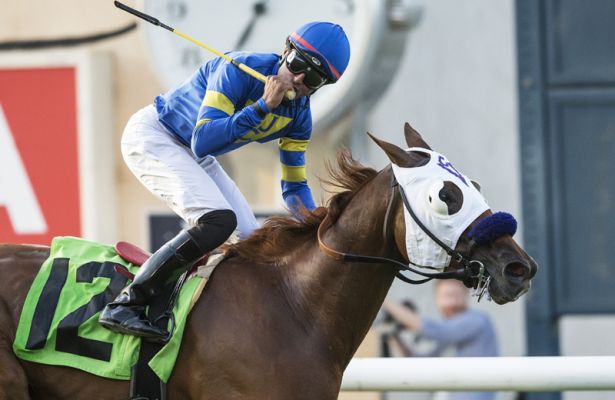 The rains that doused the Jimmy Durante Turf Course Thursday and Friday have added questions and intrigue to the mix for Sunday’s Grade 1, $300,000 Matriarch Stakes.

As if the closing-day, signature event of fall racing at Del Mar needed more of those things.

There were already points to ponder regarding how the locally-based horses would do against a bunch of well-credentialed shippers and how those invaders would handle the travel and expected firm footing. Now trainers in both categories have to wonder how suitable the ground, protected Thursday and Friday with scheduled races moved to the main track, will be for their representatives.

Some indication will be given Saturday when the course, initially labeled “good,” reopens for five turf races, chief among them the Grade 1, $300,000 Hollywood Derby. Even so, there’ll be cause to wonder left over to Sunday.

Fahan Mura, ridden by Edwin Maldonado, has gone wire-to-wire in four of her six victories in 2018 and she led most of the way in two graded stakes on-the-board finishes. The 4-year-old daughter of English Channel was third in the John C. Mabee Stakes (G2) here in September and second in last month’s Goldikova (G2) at Santa Anita, both times beaten by Matriarch morning line favorite Vasilika.

Six of her nine races this year, and eight of the last 11 for Fahan Mura, a career earner of $341,470, have been over the one mile turf conditions of the Matriarch. But Cerin doesn’t encourage the ‘miler’ label and points to a 1 ¼-mile try in the New York Handicap (G2) at Belmont Park in June, an event switched to the main track. Fahan Mura opened up an eight-length lead after a half-mile, but was passed by five horses in the last quarter-mile.

“I actually think she’s better at a mile and a quarter,” Cerin said. “The race at New York she went really, really fast early.”

Fahan Mura has posted Beyer Speed Figures in the 90s in her last seven races, a consistency that is a reflection of a no-nonsense personality.

“She’s not a toy, she’s her own woman,” Cerin said. “She likes attention, but she doesn’t want you to play with her. And she’s probably the fastest jogger I’ve ever had in my barn. She jogs like she’s a machine.

“On the track, she’s all business. Just a real nice, professional racehorse.”

Stabled next to Fahan Mura in Barn D is Valadorna, who shipped in from New  Orleans for trainer Mark Casse. The 4-year-old Kentucky-bred daughter of Curlin was switched to turf racing in September and finished second in the Ladies Turf (G3) at Kentucky Downs, beaten a neck by Matriarch rival Insta Erma, and fifth in the First Lady (G1) at Keeneland in October. Both were on turf courses labeled “good.”

“It (Matriarch) is a tough race, that’s for sure, looks like the toughest race of the meet,” said Allen Hardy, a Casse assistant who’ll give Mike Smith a leg up into the saddle Sunday. “But she shipped in well and she’s had a couple gallops over the track and handled it well.

“With the rain, the turf might be a little bit soft and that would be to her advantage.”

Racing! Going to be an interesting Belmont

Thomson puts faith in Harry as he looks for fourth Borders...