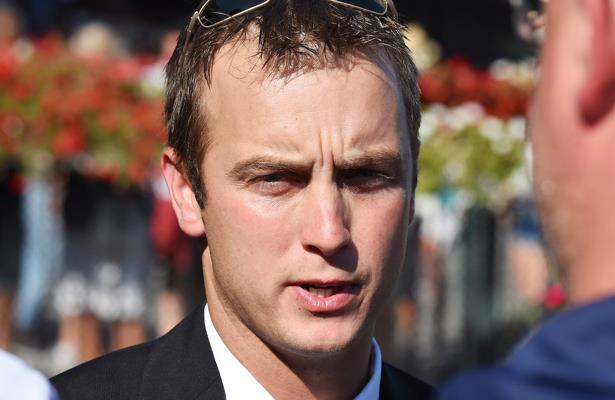 “We really had to exercise some self-control in waiting for her to get down here,” Sharp said. “She’s been ready to run for a while and we flirted with the idea of running her in Kentucky because I think she is capable of beating open company. (Owner) Carl (Moore) and I talked about targeting the stakes for state-breds down here and to help ensure that we would win first time out we wanted to run her against her own kind and make it easier on her.

“I thought she was very mature through the majority of it. She got a little green inside the sixteenth pole and Adam went left handed but it was nothing that concerned me.”

Midnight Fantasy is bred in Louisiana by J. Addock and Hume Wornall. Moore purchased her at the Equine Sales of Louisiana Two-Year-Old Sale for $77,000.

“She’s matured and she’s feeling better,” Scherer said. “She’s just growing up and she didn’t have as many problems in the race either. The less you have to do with her, the better she runs. Thank God we hung on. You can barely see (second-place finisher Eskenformore) in the photo.”

The Tom Benson Memorial was Remember Daisy’s second stakes victory and her first on grass. Earlier this year, she won the Louisiana-Bred Premier Night Starlet Stakes at Delta Downs on February 10.

Scherer could score another stakes victory early on in the meet when he saddles Shakopee Town in Sunday’s Happy Ticket Overnight Stakes.

The 3-year-old daughter of Jersey Town widened some eyes at the end of last meet when she broke her maiden by an emphatic 14 lengths over a fast main track on March 30. She jumped right into stakes company next out to take Prairie Meadows’ Goldfinch Stakes on April 26. Scherer gave her some time off and she returned to a second-place finish in a Delta Downs allowance race on October 18 where she finished second beaten a half-length behind three-time winner Inspeightof.

“She’s ready to go,” Scherer said of Shakopee Town. “She’s another one that was just growing up as a two-year-old turning three. She was remodeling and everything was still growing on her so we stopped on her after the stake race. Then she came back here and she ran a pretty nice race over at Delta. She got up to them and she broke slow up but it’s a deeper track so she got tired. The other horse that beat her was a nice one, too.”

Opening Day was a prosperous beginning for trainer Eduardo ‘Lalo’ Rodriguez and jockey Sophie Doyle, who teamed up to win two races in the first day of racing at Fair Grounds.

“We’re really happy,” said Lalo Rodriguez’ assistant trainer Alexis Claire. “We wanted to start off the meet hot and we got it done. Two wins for Sophie, two wins for us. We’re putting each other on the map and we’re really happy about it.”

Doyle entered the meet coming off of a highly successful meet at Arlington where she was the third leading rider with 52 victories.

David Ord on the Betfair Chase and an epic Fighting Fifth...

Fell Swoop to pose a threat to Alizee in Christmas Classic

Sunland Derby and Oaks winners and predictions from our racing expert