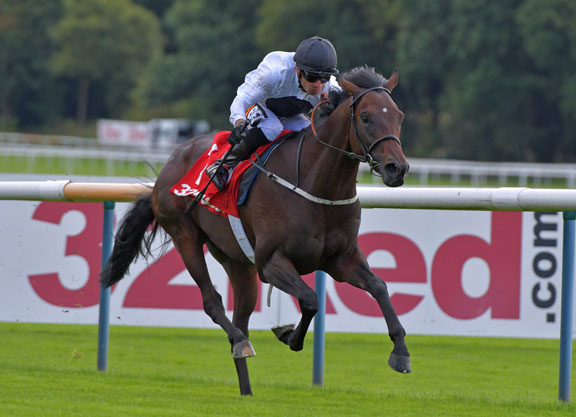 France’s Classic protagonists re-emerge at ParisLongchamp on Sunday, but it is an overseas challenger who sets the standard in Chilean (GB) (Iffraaj {GB}) in the G3 Prix la Force. Impressive when capturing the Listed Ascendant S. at Haydock in September, Manton Estate Racing’s bay was sixth in the G1 Racing Post Trophy at Doncaster the following month but trainer Martyn Meade thinks he was below-par there. “I wasn’t really happy with his performance, I don’t think he was quite himself,” he explained. “To be quite frank, I’d have expected him to run a bit better than that and after that we put him away. I just don’t think he was in top form that day, so we’re hoping for better things.” Meade is planning a Classic campaign for Chilean, adding, “From there, we’ll decide which way he goes and whether he goes to the [G2] Dante–which could be a possibility–or alternatively the [G3] Classic Trial at Sandown. It will be one of those races once we see exactly how he gets on in France. The great thing is that he copes with soft ground, which gives us lots of options, but I think he’ll be alright on good ground as well.”

The Niarchos Family’s colours always elicit excitement and they are adorned by Study of Man (Ire) (Deep Impact {Jpn}), a grandson of Miesque who beat the subsequent winner Near Gold (GB) (Dansili {GB}) in a mile debutantes race at Saint-Cloud in September. Godolphin have a duo in the once-raced maiden winners Magny Cours (Medaglia d’Oro) and Rashke (GB) (Redoute’s Choice {Aus}). Both were impressive scorers at Chantilly and the operation’s Lisa-Jane Graffard is hoping they can make an impact. “Magny Cours won his maiden very nicely at the end of his two-year-old year, but this is obviously a big step up on his seasonal return,” she commented. “He has wintered well and is an impressive-looking individual. The ground is a bit of an unknown factor, but progeny of Medaglia D’Oro seem to be pretty versatile and we hope that he can run well. Rashke was unraced at two, but won his only start impressively last month. We are slightly less confident over whether he can handle the ground, but we will find out if he can cope with testing conditions.”

Commercials For And Against “Historical Horse Racing” In Idaho Jockey For...

What to watch for on Churchill’s Stephen Foster Handicap night