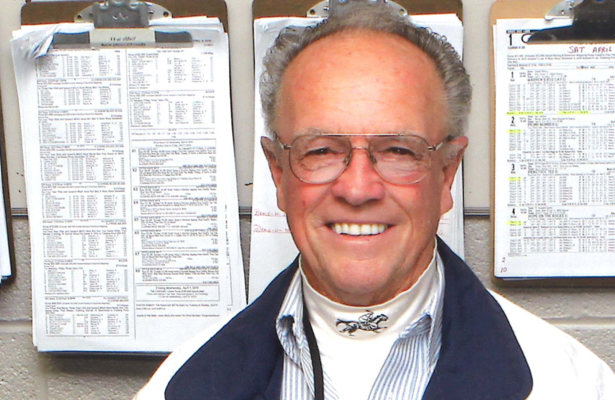 Retired jockey Larry Snyder, a longtime steward at Oaklawn, died Monday after battling cancer. He was 76.

Snyder, whose death comes just days after Oaklawn dedicated its new winner’s circle to him, was born June 29, 1942 in Toledo, Ohio. He enjoyed a 35-year career as a jockey that began in 1960 and included eight riding titles at Oaklawnm where he won 1,248 recorded races. Among his most notable Oaklawn wins were the 1983 Rebel Stakes aboard that year’s Kentucky Derby winner, Sunny’s Halo, as well as the 1989 Arkansas Derby on Dansil, whom he would ride to a fourth-place finish in both the Kentucky Derby and Preakness Stakes.

“Larry was a very beloved member of the Oaklawn family,” track president Louis Cella said. “We were all happy that we were able to honor him with the new winner’s circle before he passed. It was a very proud moment in Oaklawn’s history. We are able to recognize someone who played an important part of our past with something that will begin a wonderful new tradition at Oaklawn. Please join the Oaklawn Family in sending our thoughts and prayers to the Snyder Family.”

Snyder became only the sixth rider in U.S. racing history to reach 6,000 career wins at Louisiana Downs on Aug. 24, 1989. That same year, Snyder’s distinguished career was recognized by his peers through the prestigious George Woolf Memorial Jockey Award. Snyder retired in 1994 with career earnings of $47,207,289 and 6,388 recorded victories, which still ranks him 14th among all North American jockeys 24 years after his retirement.

“In my 40 years at Oaklawn, I don’t know if I worked with anyone with more integrity than Larry Synder,” Senior Vice President Eric Jackson said. “He lived his life the same way on the track as he did off of it. Larry will be greatly missed.”

A longtime resident of Hot Springs, Ark., Snyder is survived by his wife of nearly 57 years, Jeanette, who is renowned for her jockey silks, and son, Larry, Jr. He was preceded in death by his daughter, Lynette.

New channel replaces At The Races but Irish followers can still...

editor - January 13, 2019
0
At The Races will be relaunched as Sky Sports Racing next year. The channel will be available to all Sky subscribers in the UK...

Brexit vote, International attention and a Gold Cup on Saturday |...