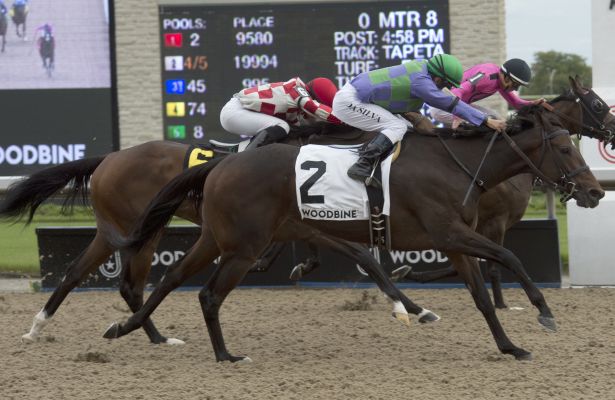 Gamble’s Ghost, known for her heart-stopping late rallies, did not disappoint as the 4-5 favorite as she registered her third consecutive stakes
victory and her second in the 1 1/16-mile Belle Mahone Stakes at Woodbine Racetrack on Sunday.

With Eurico Rosa da Silva orchestrating his usual magic, Gamble’s Ghost trailed the field to midway on the final turn and came with a five-wide move turning for home which
she sustained en route to another last-gasp head victory in a final time of 1:44.51.

“Every time this filly comes for me to ride here, she’s in the best shape she can be,” said da Silva, who was recording his meet-leading 18th stakes victory.

“It was very scary for me, especially on the first turn here when they slowed the pace so much. It was very, very slow and I had no chance to take outside because I would
be losing a lot of ground.

“From the first turn I was trying to see where I could sneak inside and, you know what, there was no room there for me to go.”

My Arch Enemy, who had defeated Gamble’s Ghost when both were debuting this spring, had finished third behind that rival in two subsequent encounters but seemed to be primed
for vengeance after controlling the pace in the Belle Mahone.

Breaking alertly, the Mark Casse-trained My Arch Enemy led through fractions of :25.25, :49.94 and 1:14.31 while pressed by longshot invader Babybluesbdancing.

Heading into the final turn, Gary Boulanger looked to steal a march on his opponents when opening up a lead of about three lengths.

“I needed to make a decision at the three-eighths and I just went out and I lost a lot of ground there, but she responds so well and she’s a good horse in the turn too,”
said da Silva. “Some horses don’t run in the turn; she runs anywhere.”

Mexican Hat, who had stalked the pace from third early, made a strong move around the final turn and loomed a serious threat turning for home. But My Arch Enemy kicked away
again, leading through a mile in 1:38.47 only to fall victim to Gamble’s Ghost’s furious rally.

Mexican Hat held well for third money, just a neck behind the runner-up.

Superioritycomplex, in from Chicago for trainer Michael Stidham, raced behind horses early and finished evenly for fourth money, another 5 1/2 lengths back.

Daddy’s Great Bay, Babybluesbdancing, and Giada Vegas, also trained by Casse and hampered by a poor start, completed the order of finish.

“That one was a nail-biter,” said Josie Carroll, who trains Gamble’s Ghost for owner/breeder Ivan Dalos. “You can move her all you want, but she’s going to move when she’s
ready to move. She knows where she’s going and she gets it done.”

Gamble’s Ghost now sports a record of 10-3-1 from 20 starts and the Belle Mahone was her seventh stakes victory.

Horse racing: With Pimlico aging, Preakness wonders what is the best...

editor - May 16, 2018
0
Emma Patti Harris/Baltimore SunCaptionPimlico Race Course is the home of the Preakness Stakes, but is in dire need of renovations, perhaps costing between...

Talking Horses: Why it might be time to take on Finian’s...

Justify back at Churchill as fans bask in Triple Crown glory

Racing! The road to the Kentucky Derby is now over

Greatrex bullish over the chances of exciting prospect Emitom | Horse...