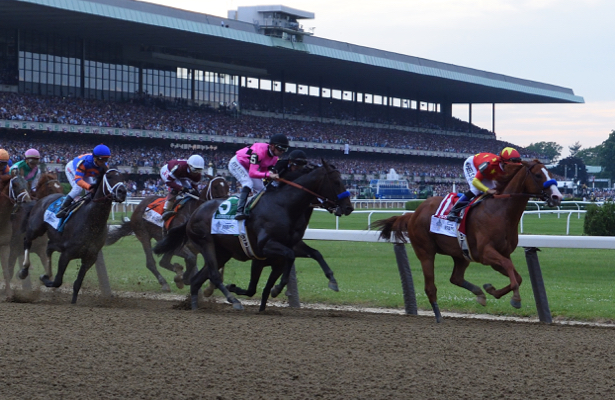 Mike Repole, co-owner of 2018 Belmont Stakes runners Vino Rosso and Noble Indy, in an interview with the New York Post called for New York stewards to look into what he deemed a reckless ride aboard a longshot rival in Saturday’s race.

Jockey Florent Geroux guided Restoring Hope through early traffic from the No. 5 post position and allowed his horse to carry wide into the clubhouse turn. The colt then pulled toward the rail the back stretch, flanking Triple Crown hopeful Justify before fading to finish eighth.

“It definitely seemed to me he was more of an offensive lineman than a racehorse trying to win the Belmont,” Repole said in an interview with the New York Post, “and Justify was a running back trying to run for a touchdown.”

Given the stakes (a Triple Crown) and the attention (near-record wagering), Restoring Hope’s potential role in the outcome was a source of debate as soon as they hit the wire Saturday.


Restoring Hope, as with the Triple Crown winner Justify, is trained by Bob Baffert, who said after the race that, “Restoring Hope, he has natural speed, and his only chance was to be up near the lead in the first wave because he’s like a one-dimensional horse. But he was getting a little — they were getting a little rank — I think they were going pretty fast. But he’s not a horse to come off the — take back. All his races were decent where he had to be up close. We were just giving him a chance.”

Additionally, Baffert pre-race did indicate the horse would be positioned near the front early.

Reporter Tom Pedulla, writing for the Post, also reached Gary West, Restoring Hope’s owner, via email. West wrote that he had “no earthly idea what Florent was thinking or what his race strategy was. Had I known better, the first eighth of a mile I would have thought it was a quarter-horse race, not the mile-and-a-half Belmont.”

Repole was also upset with the ride given by Javier Castellano on his Noble Indy, who was expected at the front early but never made it near the pace before finishing last of 10. Noble Indy is co-owned by WinStar Farm, managing partner in Justify.

“He decided to call an audible, and that’s not the way we wanted the race run,” Repole told the Post of Castellano. “I am baffled by the audible.”

editor - May 17, 2018
0
Spring brings a new season to the racetracks, when horses and memories seem young and fresh. By Kevin Cuneo / Contributing writer As the 2018...