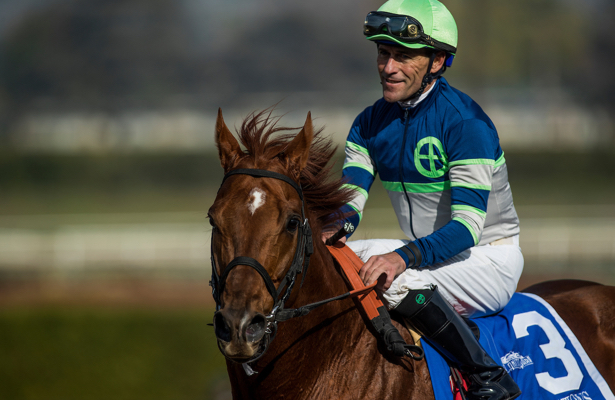 TVG reporter Britney Eurton — also the daughter of trainer Peter Eurton — broke the news Sunday that when it comes to the Jan. 27 Pegasus World Cup, “As of this morning, there are now only two starting spots left in the starting gate of 12.”

Eurton-trained Giant Expectations will indeed make a run at the $16 million Pegasus next month at Gulfstream Park, where he’ll enter off a win in Tuesday’s Grade 2 San Antonio Stakes at Santa Anita Park.

A soon-to-be 5-year-old son of Frost Giant, the colt wired the race, which included Grade 1 winners Hoppertunity and Collected, who had finished second in the Breeders’ Cup Classic in his last start.

Britney Eurton said jockey Gary Stevens will remain aboard in the Pegasus.


THIS JUST IN: Britney Eurton reports that Giant Expectations will be running in the 2018 Pegasus World Cup. pic.twitter.com/wKZQkaiFIb

In a statement to TVG, co-owner Exline Racing’s Ryan Exline said, “From the day we purchased him, we have always believe he could compete at a very high level. The Pegasus is going to be a very tough race, but it’s the right time to take a big shot with our colt. The Eurton barn has done an incredible job with him, and we are confident he can fire his best race.”

Giant Expectations also ran sixth in the Breeders’ Cup Dirt Mile before given the chance to stretch out a bit in the San Antonio at 1 1/16 miles. The Pegasus’ distance is 1 1/8 miles.

Frank Stronach has a slot to fill for a horse to be named, while recent Grade 1 Cigar Mile winner Sharp Azteca remains under heavy consideration.

As many as 12 can enter the Pegasus.

Caulfield tips: Our experts build a case for several runners at...