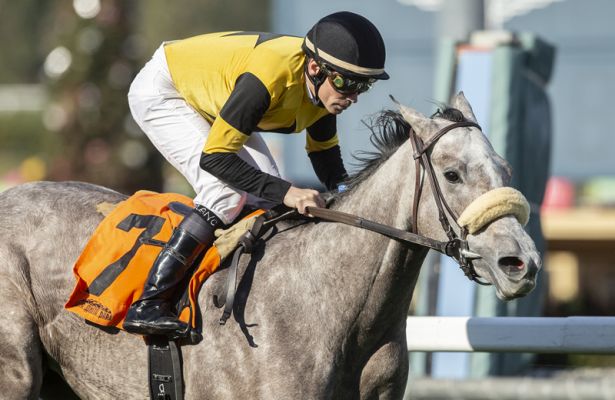 A romping one mile turf maiden winner in her most recent start, Giza Goddess faced stiffer competition under similar conditions and responded with a gutty half-length win while surviving a stewards’ inquiry to take Sunday’s $75,000 Blue Norther Stakes at Santa Anita.  Ridden by Brice Blanc and trained by John Shirreffs, the 2-year-old daughter of Cairo Prince got a mile on turf in 1:34.64.

Breaking sharply from her No. 7 post in a field of eight juvenile fillies, Giza Goddess settled nicely under Blanc while third and caught four-wide into the Club House turn. From there, she was in-hand while third, just to the outside of eventual runner-up Colonial Creed, who was about two lengths off early leader Courteous heading to the far turn.

Three furlongs from home, Giza Goddess appeared to shift in about a half-lane and at that point, Colonial Creed and Rafael Bejarano got shuffled back a bit, resulting in the inquiry, as well as a claim of foul from Bejarano. After reviewing all angles, the stewards determined the incident did not cost Colonial Creed a better placing.

“I was worried, because she was leaning on horses today,” said Blanc. “She’s still a little green but she’s got a ton of potential. I’ve had the chance to ride her on the grass in all three of her recent starts and she keeps improving every time…She still doesn’t know exactly what she’s supposed to do and that’s what happened today when I passed Rafael.

“She started to lean a little bit and went on. It was enough to look a little tight…I’m glad she kept to her task and finished nicely. I’m really excited about her.”

Owned by West Point Thoroughbreds, Mercedes Stables, LLC, et al, Giza Goddess now has two wins from six starts and with the winner’s share of $46,440, she came within ten dollars of doubling her bankroll, which now totals $92,980.

“I think switching to the turf is what moved her up,” said Shirreffs. “It’s made all the difference with this filly. It was nice to be able to run back again at a mile, but beating maidens is one thing and beating winners is another…I was wondering if she would settle well today, and she did.”

Ridden by Flavien Prat, Thriving closed good ground to finish a head in front of favored Lady Prancealot for third money. Off at 4-1, Thriving paid $4.60 to show.