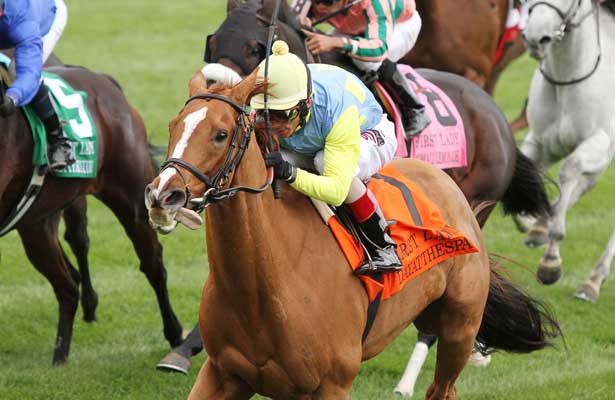 European trainer John Gosden signed the ticket Thursday for Godolphin on a $1.6 million purchase during the final session for book one at the Keeneland September Sale. Hip 823, a Medaglia d’Oro colt, is the second foal from Breeders’ Cup champion Datatthespa.

As of Thursday afternoon, it was the day’s biggest purchase with 22 million-dollar horses sold.

“He’s out of a great broodmare. Good sire. He was the best yearling they thought they had this year at Gainesway. We pretty much wanted him but so did somebody else.”

Dayatthespa, by City Zip, earned over $2.2 million. She earned Grade 1 victories in the Breeders’ Cup Filly and Mare Turf, the First Lady and the Queen Elizabeth II Challenge Cup. Her first foal is a current 2-year-old which has not started.

The bay colt sold Thursday was consigned by Gainesway, agent for Stonestreet Bred & Raised. Stonestreet purchased Dayatthespa for $1.2 million at the 2014 Fasig-Tipton November Sale, soon after the mare won her Breeders’ Cup title.

WATCH ? @godolphin went to $1.6 million to secure hip 823, a Medaglia d’Oro colt out of champion DAYATTHESPA at #KeeSept.@Gainesway @StonestreetFarm pic.twitter.com/3Y18g4i1GU

Get free Canadian International 2018 past performances