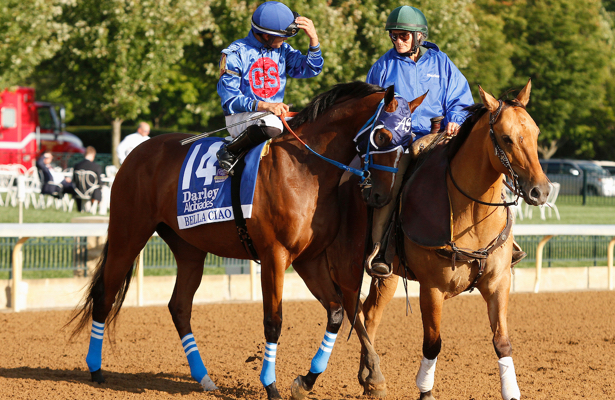 Magic Stables and Cairoli Racing’s Bella Ciao, having faced Grade 1 company in her two most recent starts, will cut back in distance and class for her latest assignment in the $75,000 Hut Hut.

Bella Ciao, trained by Antonio Sano, will be trying one mile for the first time. In her most recent outing, the bay daughter of Flatter bobbled at the start of the 1 1/16-mile Alcibiades (G1) Oct. 5 at Keeneland and was never involved, finishing 10th.

In her previous race, Bella Ciao got within a half-length of the lead entering the stretch and had to settle for fourth of 11, beaten 3 ¼ lengths, in the seven-furlong Spinaway (G1) at Saratoga. That race came after she graduated with a three-quarter-length victory going six furlongs at Gulfstream July 26.

“She is a nice filly. She is more suited for the longer distances,” Santo said. “We took her to Saratoga after she broke her maiden and she ran a good race. The next race she had a big problem in the gate and then she came out of the race with a cough. She is ready for the race. She already won here and it’s very important to have a win over the track. We like her very much. We want to get a win with her.”

Irad Ortiz Jr., locked in battle for the 2018 Eclipse Award as champion jockey with younger brother, Jose, will ride Bella Ciao from Post 4.

Trainer Stanley Gold entered a pair of Arindel homebreds in Bimini and Durlyn, both daughter of Brethren coming in off front-running victories.

Bimini broke her maiden at Gulfstream in debut June 23 and most recently went the distance in a one-mile optional claimer Oct. 18 at Gulfstream West to beat Hut Hut rival Busy Signal by 2 ¾ lengths. Jeffrey Sanchez, regular rider for both fillies, took the call on Bimini from the rail post.

Durlyn was a runaway 17 ¾-length maiden claiming winner going one mile Sept. 30 at Gulfstream, and will be trying stakes company for the first time. Bimini finished off the board in both the Florida Sire Desert Vixen and Sharp Susan Stakes between her two wins.

“Bimini is doing good. She’s going to run good,” Gold said. “She’s legit, and we’ll see if she’s good enough to run in this company. She’s an improving 2-year-old that looks like she’ll be able to go a mile and two turns, preferably two turns. A mile is good and she’s doing good, so I don’t expect her to run any worse than last time. She’s not a horse that needs the lead.”

“Did I think [Durlyn] was going to win by 17? No. When she was in front at the quarter pole, I said, ‘The race is over, because I know she’s dead fit,’ and there was nothing coming,” he added. “She’s going to go to the front and if anybody wants to try and catch her, they can. She won going away and she’s doing good. We’re curious to see what she does against that kind of company.”

Rounding out the field are Lovely Luvy and Michael Stidham-trained stablemates Sweet Diane, a 13 ¾-length maiden winner at Penn National last out Sept. 28, and Classic Fit, a winner of her last two races.

Brugger: Is it a horse race of is it unacceptable gambling?...