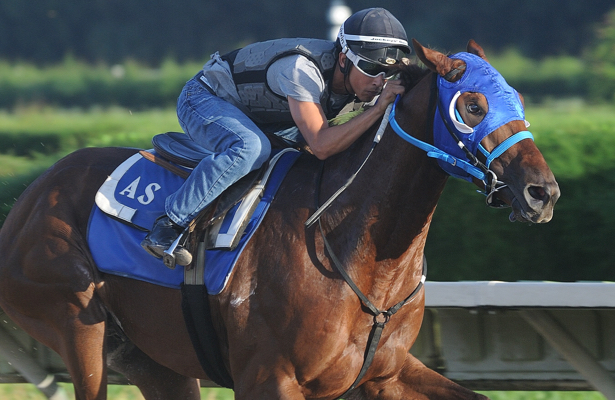 A 4-year-old son of Grade 1 winner Dialed In, Gunnevera went in 1:00.82 over a fast main track with regular rider Edgard Zayas in the irons, ranking second of 26 horses. Zayas will be back aboard for the 1 ¼-mile Classic Nov. 3 at Churchill Downs.

Unlike last week, when he returned to the work tab for the first time since a runner-up finish in the Woodward (G1) Sept. 1 at Saratoga to go five-eighths in an easy 1:02, Gunnevera breezed in company Saturday with 3-year-old Cometin, a four-time winner who was third in his most recent start, the Bear’s Den Stakes Sept. 22 at Gulfstream Park.

“He did it very easy,” trainer Antonio Sano said. “I needed the horse to have a more intense work today and get him stronger for the race. I wanted to wake him up a little bit. The work was very good and he is very happy.”

In the 1 1/8-mile Woodward, Gunnevera overcame a wide trip to rally from 11th to finish two lengths behind Yoshida, who is also being pointed toward the Classic. It was just the fourth start this year for Gunnevera, an earner of more than $3 million in purses. His season began when finishing third in the $16 million Pegasus World Cup Invitational (G1) in January.

After sustaining a nasty foot injury while finishing off the board in the Dubai World Cup (G1) March 31, he was given two months in Ocala to allow the foot to heal before returning with a sharp 6 ½-length victory in an Aug. 10 optional claiming allowance at Gulfstream Park prior to the Woodward.

Gunnevera finished in a dead heat for fifth in last year’s Breeders’ Cup Classic with champion Arrogate, inaugural winner of the Pegasus World Cup in 2017, and 6 ¼ lengths behind 2018 Pegasus winner Gun Runner.

Sano said Gunnevera will have two more works at Gulfstream Park West, the latter on the morning of Oct. 26, after which he will leave for Kentucky.

“I am very proud of my horse,” Sano said. “He looks very good and he is doing very good. We are looking forward to the race.”

Win Win Win lives up to his name in record Pasco...

Full results from day five of the 2018 Royal meeting

Horse racing tips betting tips: Back Minella to Bolt up in...