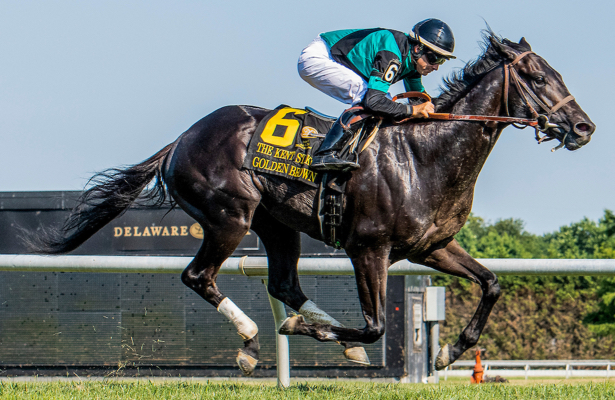 New Jersey-bred Golden Brown, winner of the 1 1/8-mile Kent Stakes (G3) on turf this summer, cuts back to sprinting in his return to the main track for Saturday’s $100,000 City of Laurel at Laurel Park.

The City of Laurel for 3-year-olds and the $100,000 Safely Kept for 3-year-old fillies, both at seven furlongs, are among five stakes worth $500,000 in purses on a 10-race Maryland Hall of Fame Day program. First race post time is noon.

Also on tap are the $100,000 Richard W. Small for 3-year-olds and up featuring graded-stakes winners Something Awesome, Name Changer and Doctor Mounty and Maryland Million champions Bonus Points and Talk Show Man, and a pair of six-furlong sprints for juveniles, the $100,000 James F. Lewis III and $100,000 Smart Halo, the latter for fillies.

Golden Brown drew the rail in a field of nine and shares top weight of 120 pounds with Smooth B, two pounds more than their seven rivals. The Pat McBurney trainee has made four straight starts at nine furlongs, all in graded-stakes, most recently running sixth in the Hill Prince (G2) Oct. 6 at Belmont Park after pressing the early pace.

The Offlee Wild colt came from a stalking spot to run down the leaders and win the Kent by 1 ¾ lengths, then ran fifth to Good Magic in the Haskell (G1) July 29. The Haskell was Golden Brown’s lone dirt try since beating his state-bred elders in a six-furlong allowance May 26, also at Monmouth.

“All the owners are from the Monmouth area and to be invited to the Haskell. It’s a big thrill for us. We thought that he had done well on the dirt and just to get a chance to run in the Haskell was exciting,” McBurney said. “He actually ran rather credible. We had a very wide trip in the race but he was fifth in there and beat a couple guys and bounced out of it good. We kind of feel like he handles the dirt almost as good as he handles turf.”

Golden Brown has two wins and two seconds in six dirt races, breaking his maiden on a sloppy Parx track Feb. 24 prior to his allowance win. Sheldon Russell is named to ride for the colt’s Laurel debut.

“He gets himself a little hot before a race and even [at] Saratoga race and in the Kent he’s a bit of a bully early on in a race. Then, he prefers to settle back off horses but it’s not always easy for the jock to get him back where he should be,” McBurney said. “It’s fantastic to have a race for straight 3-year-olds this time of year. Those are the races we’re looking for to keep them with their own, because the 4-year-olds are bigger and stronger. The 3-year-olds are catching up this time of year, obviously, but it’s always better to stay with your own age group as long as you can.”

Wertheimer and Frere’s Rugbyman returns to Laurel after defeating older horses in his only previous trip, an open one-mile allowance Sept. 21 for Fair Hill-based trainer Graham Motion. The Tapit colt followed up finishing third by 1 ½ lengths in a 1 1/16-mile optional claimer Oct. 21 at Keeneland behind multiple stakes winner Bal Harbour.

“I actually thought it was a pretty solid effort last time. It was a very competitive race. It could have been a stake anywhere else, I think. I thought he ran well,” Motion said. “I liked the idea of shortening him up to seven-eighths. I’m thinking more and more that this is what he wants to do, kind of the one-turn deal. I know we always say this, but I actually feel like he’s doing really well.”

Rugbyman also beat his elders in just his second start, a 14-length maiden special weight romp in the Belmont Park mud May 13, also at a mile. He was stretched out to 1 1/16 miles in the Easy Goer, running second by a neck, and 1 1/8 miles in the West Virginia Derby (G3) Aug. 4, where he was no factor. In between he was fourth to Grade 1 winner Firenze Fire in the Dwyer (G3).

“I feel like he’s doing better now than he was perhaps over the summer. If he improves from that last race, and if he appreciates shortening up to seven-eighths, I don’t see why he wouldn’t run a good race,” Motion said. “I kind of feel like his one-turn races have been his best races. Maybe I’ve been trying to get him to do something over the summer that he didn’t necessarily want to do. I can’t believe how good he looks now. He’s filled out and grown up. He’s a big horse anyway, but he’s just a big, strapping dude.”

Jacks or Better Farm’s Grade 3-placed homebred Old Time Revival enters the City of Laurel off his first career stakes win, a nose triumph in the seven-furlong Challedon Sept. 29. The win improved the Brethren colt’s record at Laurel to two wins, two seconds and two thirds from nine tries, including runner-up finishes in the Miracle Wood Feb. 17 and Concern July 7.

Old Time Revival, second in the Gotham (G3) this winter at Aqueduct in his sojourn on the Triple Crown trail, tuned up for his latest assignment with a half-mile breeze in a bullet 47.60 seconds Oct. 26 at Laurel.

“He had a real nice work the other day and came out of it real well. He’s doing good and he’s one that really likes this racetrack,” trainer Ken Decker said. “He’s been a nice colt from the beginning. He’s had some issues, but it looks like we got them straightened out. He loves it here. It makes a lot of difference for him. When he ships, he doesn’t do as well. He likes to come out of his house, and this is where he likes to run.”

Fault Suffers Hind Leg Injury During Gallop, Could Be Retired –...