The first time Lo Kam-wing visited Hong Kong’s Happy Valley Racecourse, it was 1974 and he wasn’t supposed to be there.

Then just 14 years old, Lo and a few schoolmates made their way to the racetrack one day after school to try their luck at getting around the 18-and-over admission policy. Maybe the ticket taker didn’t care. Maybe the policy just wasn’t as strict as they expected. Whatever the case, as soon as the boys were allowed in, they disappeared quickly into the crowd, hoping not to be caught.

How American gambler won US$1 billion on Hong Kong horses

It was an act of daring, something the boys did to prove they weren’t afraid – even though, Lo says, they were. The boys quickly took a liking to the racecourse, though, with its lively crowds and thundering packs of horses. Soon Happy Valley, where races run most Wednesday nights from September to July, became a routine after-school destination.

These days, nobody in the grandstands would doubt Lo belongs. At 58, with wispy grey hair and big eyeglasses, Lo looks back fondly on the exhilaration races he attended in his younger years. But last week, on the last evening of the 2017-18 racing season, he still got a thrill from it all.

“It was this close,” Lo says, gesturing enthusiastically with two fingers after Letsgofree bested Celebration in the first race by barely a nose. “It’s always exciting.” 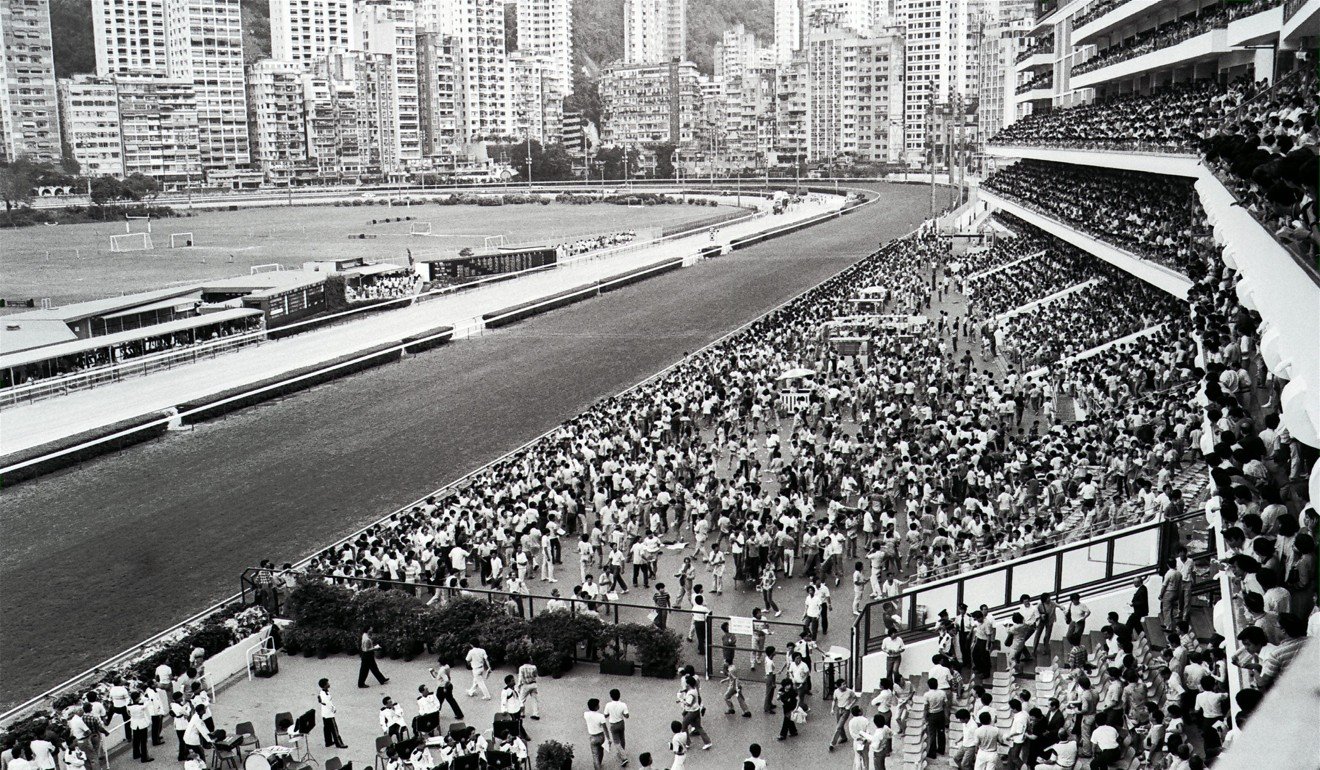 Horse racing in Hong Kong dates back to the earliest days of British colonial rule, with the first race at Happy Valley running in 1846. Over the years, the pastime became a symbol of the city’s identity – so much that, in the lead-up to the city’s handover from Britain back to China in 1997, China’s then paramount leader Deng Xiaoping assured nervous Hongkongers: “Horse racing will continue, and the dancing parties will go on.”

Today, Happy Valley draws crowds from all corners of city life, from billionaires placing big-money bets to construction workers hoping to boost their monthly earnings. Still mixing in, though, is an older generation of Hongkongers who have been cheering the thoroughbreds on for decades. For men and women like Lo, the racecourse is a place full of memories – good and bad – and the last night of the season is still an experience not to be missed. 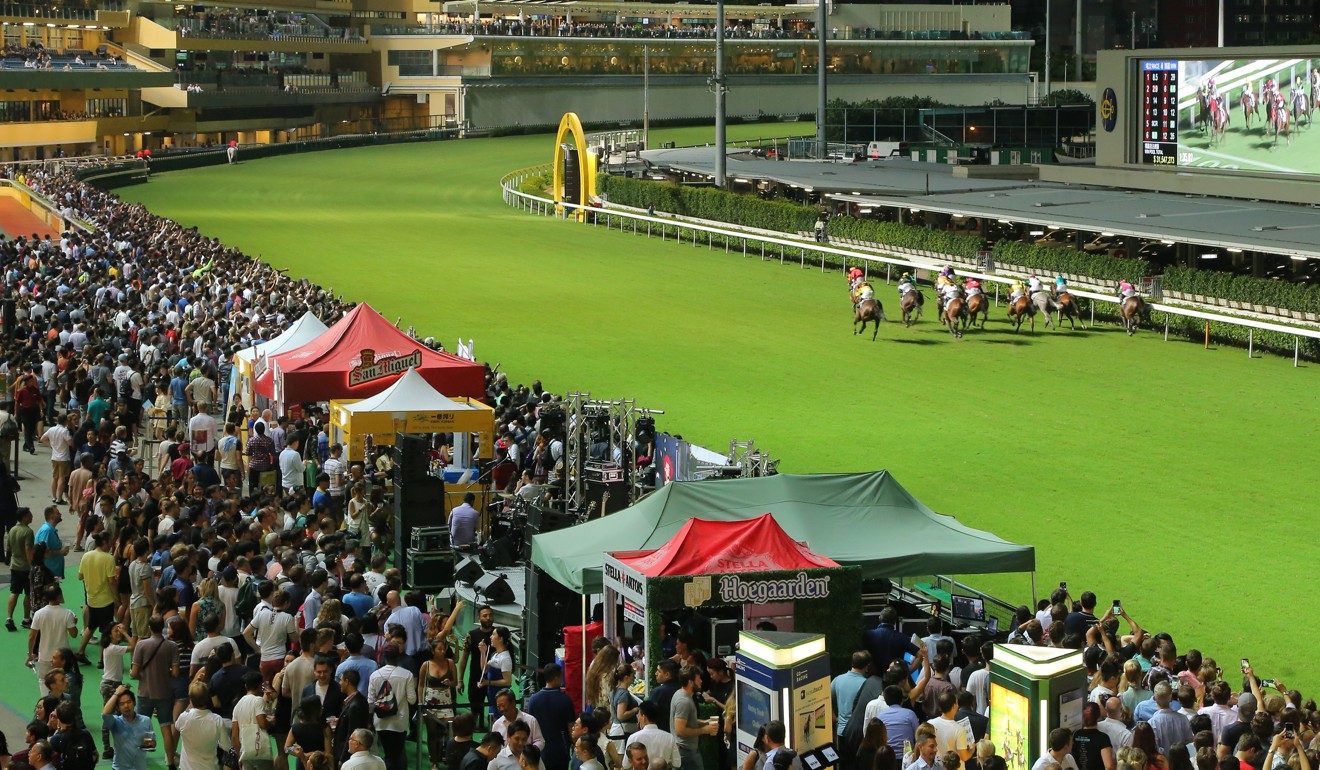 More than 22,000 people packed into the Happy Valley grandstands last Wednesday. The moment Lo moves from his seat, it is filled by a white-haired Ms Chan, who sits down to enjoy a bowl of noodles before the next race.

Chan, who declines to give her full name, has been a Happy Valley regular since the early 1990s. Her five children have all grown up and left the roost, which Chan says sometimes leaves her days a bit dull. She says she looks forward to the boost of energy she gets on race nights – from the horses, but also the live bands playing pop covers between races. 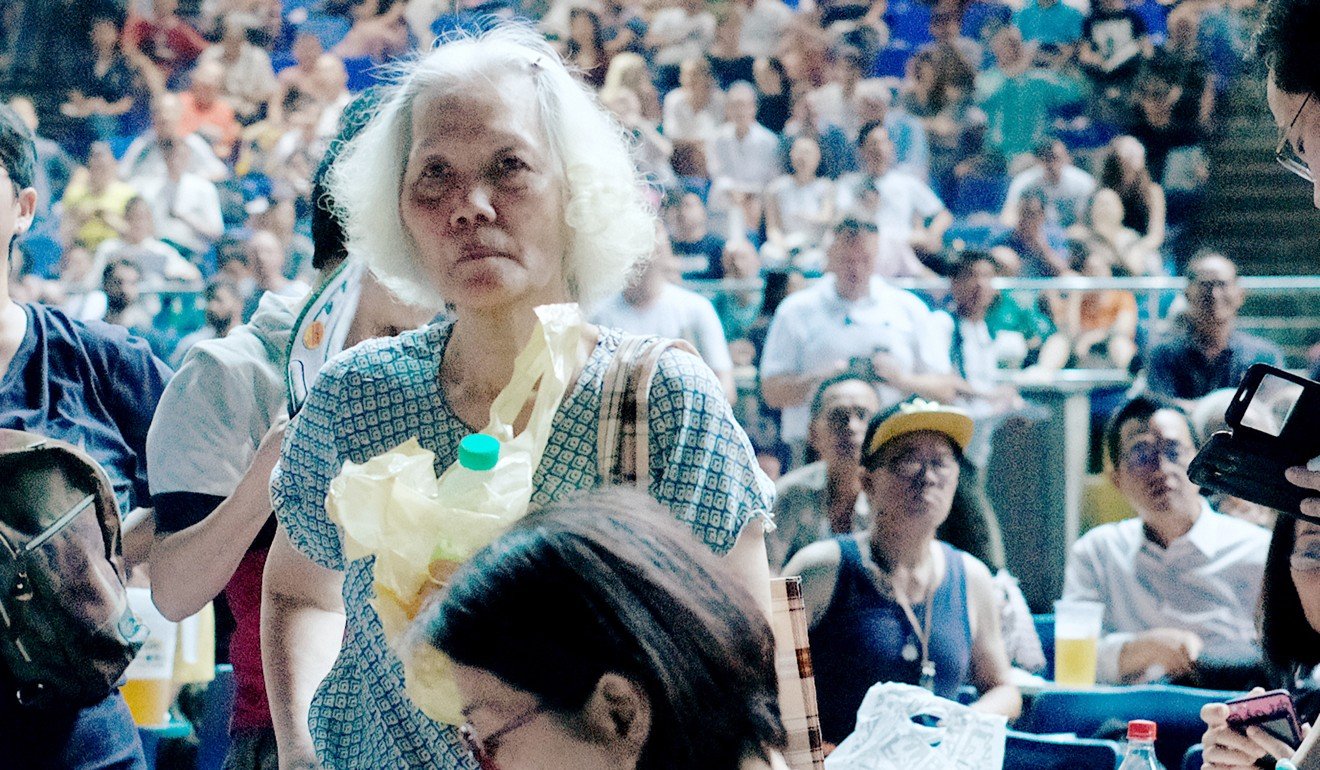 The Hong Kong Jockey Club’s “Happy Wednesday” events make for an animated scene at the racecourse. In addition to the bands, dozens of booths serve San Miguel, Kirin, Tiger, and Asahi beer by the pitcher – part of a targeted and successful effort initiated a decade ago to appeal to the younger demographic.

Unlike my wild, young days, there’s nothing to worry about now

For many of Hong Kong’s well-to-do youth, dressed for the occasion in pastel polos and party dresses, the rousing atmosphere has made the racecourse the place to be on a Wednesday night. For tourists, the races are also often a must.

The scene might be expected to annoy long-time race fans, but instead Lo and Chan say it only adds to the excitement.

Ralf Sievers, a 54-year-old native of Hamburg, Germany, says the lively atmosphere reminds him more of a soccer match back home than a horse race. “At horse races in Germany, there are maybe only 100 people,” says Sievers, who has been living and working in Hong Kong – and coming to the races – for 12 years. “But this is happy-go-lucky, like a party.” 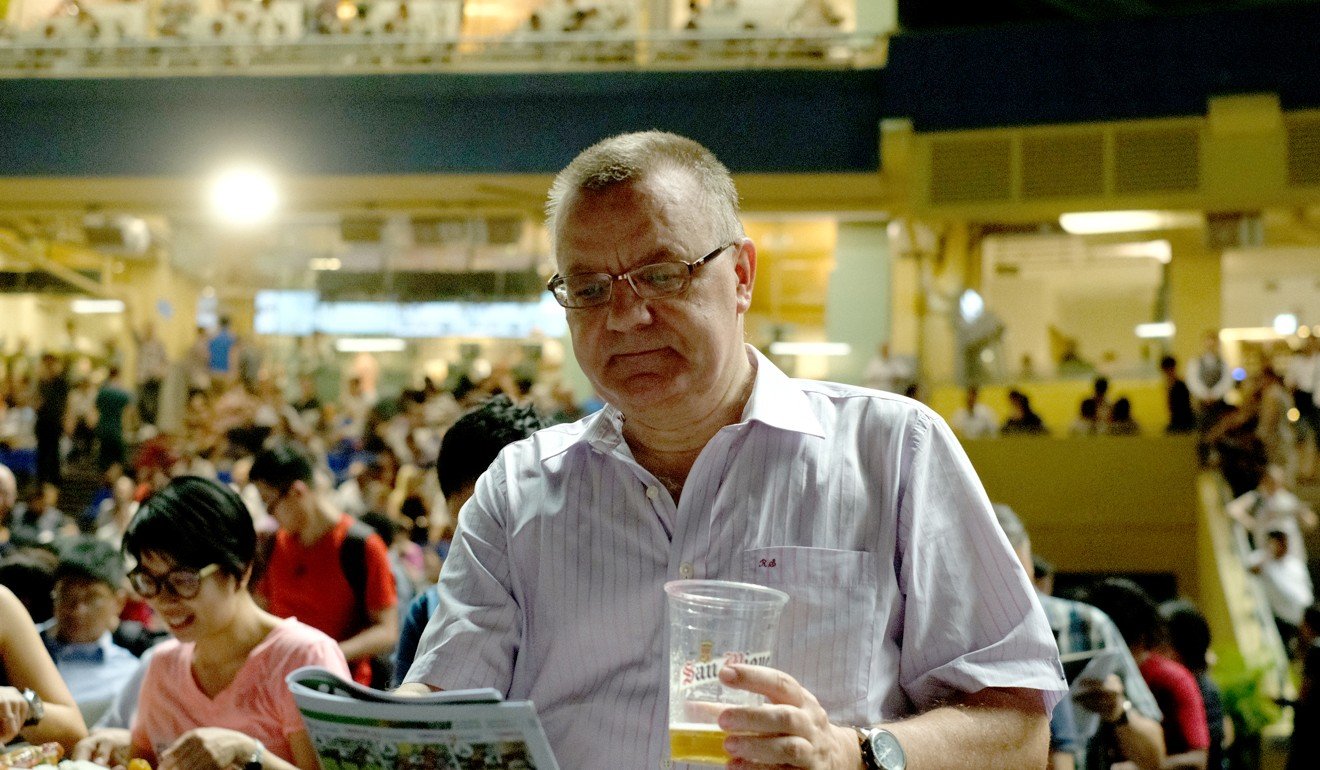 In his hand, Sievers clutches a small pile of betting stubs, one for each of the night’s eight races and no bet larger than HK$100 (US$12).

On the night, the racecourse would take more than HK$1.2 billion (US$150 million) in bets. Horse racing is one of the few forms of legal gambling in Hong Kong, and the city generates more revenue from the sport per race than anywhere else in the world. During the 2016-2017 season alone, the races brought in HK$216.5 billion (US$27.5 billion) in bets, much of which would go to charities around the city administered by the Jockey Club.

The lion’s share of bets at Happy Valley come from high-rolling Jockey Club members. But down in the grandstands, Sievers is in good company with those just in it for the fun. 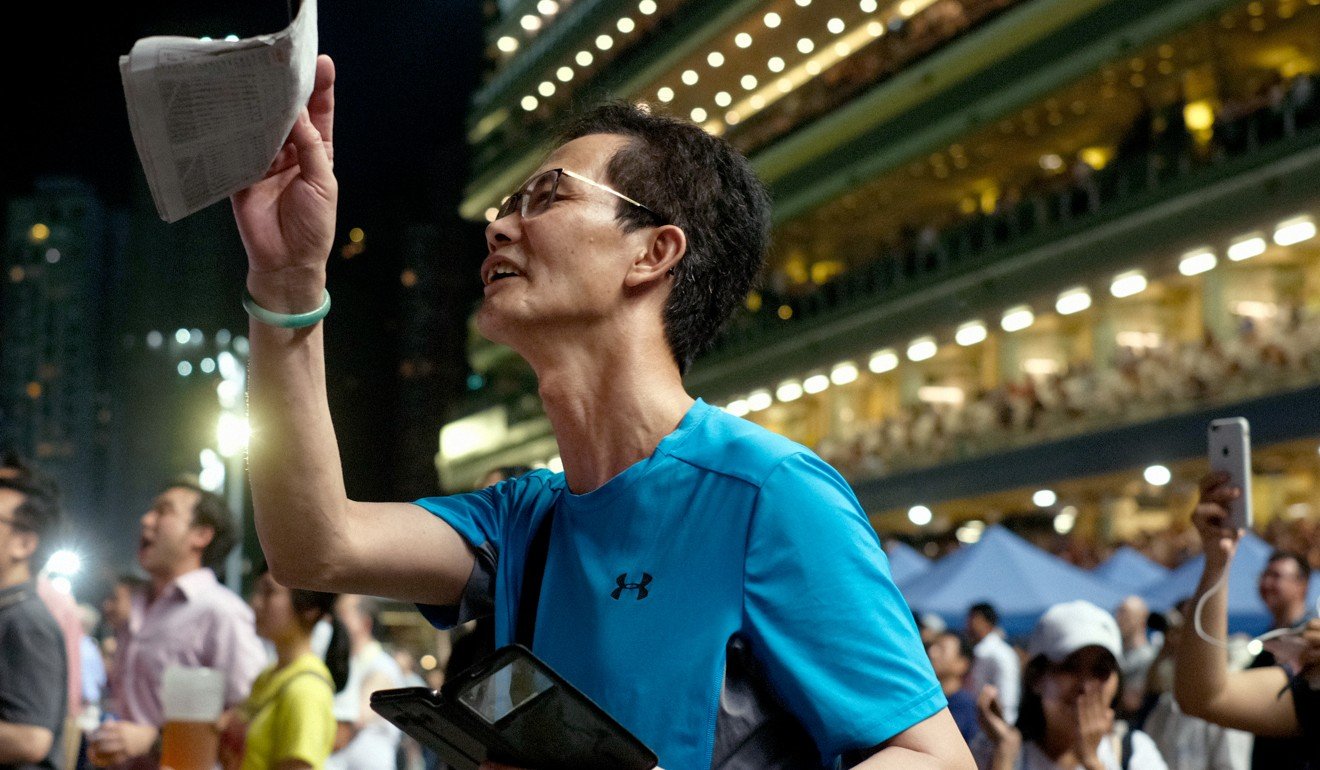 “Go!” screams Tai Zi-lik, a race fan with a jubilant smile, his hands in the air, and his eyes fixed on a big screen showing a team of horses powering across the backstretch. “Go!”

Tai, 60, began frequenting the races in the 1970s, when early success as a businessman left him with enough cash that he often placed bets in the tens of thousands of dollars. Back then, Tai says, he was overconfident and foolhardy. In the decades that followed, gambling addiction would cost Tai both his fortune and a family he loved.

Today, Tai lives alone in the city’s Kwai Chung neighbourhood and works as a nighttime security guard. He steers clear of gambling and has even spoken to youth about its risks.

Still, once a year on the last night of the racing season, Tai heads to Happy Valley to soak up the atmosphere. He allows himself one bet on one race, always a small amount.

The moment the horses burst forth from the starting gate, Tai springs to his feet to begin cheering. “Go! Go! Go!”

When the mounts cross the finish line, Tai returns to his seat, a smile still on his face.

“I’m happier here now without gambling,” Tai says, gazing at the empty track between races. “Unlike my wild, young days, there’s nothing to worry about now.”

In his hand, Tai holds his single betting stub for the night. A winning ticket.

During the season, races also run on Sundays and sometimes Wednesdays at the Sha Tin Racecourse. For help with gambling addiction, call the Ping Wo Fund Hotline at 1834 633.

Yucatan given stall 23 in bid for Melbourne Cup glory |...

what time is the horse racing on ITV this Friday?

Walk In The Sun To Jersey | TDN | Thoroughbred Daily...