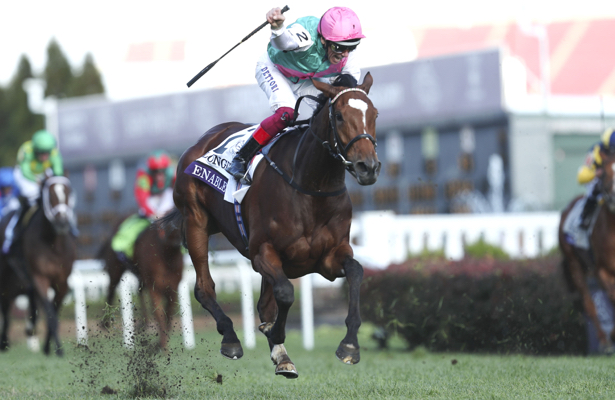 In a year that featured a Triple Crown sweep by Justify and historic campaign by Accelerate, no events involving those two runners appeared when we asked Horse Racing Nation writers to list their favorite races in 2018.

Why did other races appeal more? Read on, and let us know your opinions in the comments below.

Bee Buck: Breeders’ Cup Distaff
The field was packed with talent, including top 3-year-old Monomoy Girl and leading older runner Abel Tasman. I walked out on to the Churchill Downs track beforehand to find contenders with gleaming coats in the November sun, then focused my camera on Wonder Gadot as they jumped from the gate, bounding along with her signature stride. I watched through my lens as Monomoy Girl tracked her down coming into the first turn. Along the back stretch and into the third turn, the Chad Brown filly Wow Cat began to make her move, too. While I was thrilled to see Monomoy Girl finish her season on a high note, it was sad to see Abel Tasman last in her career finale before heading to the auction ring days from now at Keeneland’s January sale.

What a year it’s been for Chad Brown. As it concludes, he is likely to keep his position on top of the leaderboard for total earnings. The one win of his that I enjoyed the most — and my overall favorite race in 2018 — was his Grade 1 win in the Arlington Million (G1) with Robert Bruce. Coming off a win in the Beverly D. Stakes (G1) in the previous race with Sistercharlie, plus finishing second and third with Fourstar Crook and Thais, Chad Brown was poised to press for back to back wins in the Arlington Million with one of his three entries. As the field rounded the final turn, however, his chances were in jeopardy as Money Multiplier was struggling to keep pace with Century Dream. Just as it looked as though the leader was going to hold, Brown’s closer came storming down the middle of the turf course. First came Almanaar, but right behind him was Robert Bruce, who grabbed the lead on his outside before going on to win by a half length over his stablemate. Brown has now won the Beverly D. the past four years and increased his Million win total to three after scoring back to back with Beach Patrol in 2017 and Robert Bruce in 2018.

My favorite race this year was watching Monomoy Girl and Wonder Gadot throw it down in the Kentucky Oaks. Monomoy Girl drew the outside post and was challenged like in no other race all year long. At the top of the stretch, it looked like Wonder Gadot was primed to blow on by and deliver a shocking upset, but Monomoy Girl showed her toughness and held on for a game win. It was the second of her five Grade 1 wins in 2018. Monomoy Girl has a remarkable resume for a 3-year-old filly, and it is good to see her return to training in 2019.

There are some people who are lucky enough to witness history in the making. I’m one of them. The star on Nov. 3 at Churchill Downs was Enable, but no Prix de l’Arc de Triomphe winner had graduated to Breeders’ Cup glory in the same season. That was, until she stormed home a winner in the Turf. One wondered if Enable was going to get the job to cap a difficult season. The filly was plagued by an injury that stalled her campaign until September, then she was rushed into the Arc and after that had to take on a trip to America. She dealt with everything and put away Magical in the final furlong under the Twin spires. To do all this with her probably not being at her best this season was quite incredible. It was astonishing, really

It was the best race I’ve seen all year, especially from a tactical perspective. From the overhead camera angle, you can see how Wayne Lordon, the rider on Hunting Horn, kept Enable boxed in until the far turn and forced her to go extremely wide, while Magical slipped through inside. They really wanted to test Enable, but she answered all the questions. Quoting her jubilant rider, Frankie Dettori, “She conquered America! She’s done it.”

That Catholic Boy lost the lead in the stretch and re-rallied to defeat the highly regarded Analyze It in the Pennine Ridge Stakes (G3) was gutsy enough. That he replicated the effort, emerging a head winner over the same foe next time out in the Belmont Derby Invitational (G1) was simply spectacular, and a highlight for me during the 2018 racing season. Of course, getting that top-level score on turf also convinced connections the timing was right to return to the main track and take on the Travers Stakes (G1), which Catholic Boy won a bit more convincingly. The son of More Than Ready will return next year and should do so as one of the most popular horses in training having shown plenty of heart at age 3.

Saratoga is known for bringing the best of the best together during its 40-day meet, and the Personal Ensign (G1) didn’t disappoint. Abel Tasman and Elate – the leading West Coast and East Coast older fillies at the time – met for the second time at Saratoga. In 2017, Abel Tasman won the Coaching Club American Oaks (G1) by a head over Elate, and the two dueled again in the 2018 Personal Ensign. Both fillies were coming off impressive wins – Abel Tasman in the Ogden Phipps (G1) and Elate in the Delaware Handicap (G2) – and showed their grit when dueling in front of the Spa’s grandstand once again. Abel Tasman was successful, this time by a neck. While Abel Tasman was off the board her last two starts and Elate ended the season early with an injury, the Personal Ensign represented the two separate coasts, two very talented fillies and one exciting horse race.

Horse Racing Betting Tips: Hills may have unearthed yet another sprinting...