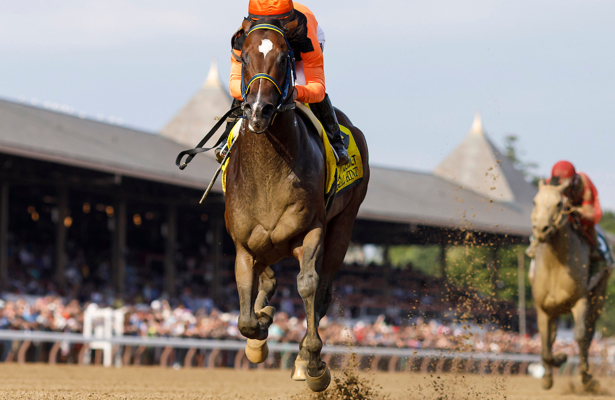 For the first time since his dominant 3 ¾-length victory in the six-furlong Alfred G. Vanderbilt (G1) July 28 at Saratoga, Imperial Hint returned to the work tab with a three-furlong breeze over the weekend.

The 5-year-old son of Imperialism completed the distance in 34.23 seconds over the main track at Parx Racing, where trainer Luis Carvajal Jr. is based. It ranked as the fastest of 18 works on the day.

“Usually we take a little time before this horse works and after he runs because he puts a lot of effort and energy into his gallops,” Carvajal said. “I think he worked fantastic. I told my rider to go three-eighths and he galloped out in 46 and four at the end of his work, and that’s typical for him. For the first work after his race, I was really happy the way he did it.

“We’re getting close to the month of September so now he’ll follow his regular schedule of works,” he added. “Before that we just jog him and gallop him and keep him fit that way. He’s doing great.”

Imperial Hint will take a two-race win streak into his next start, having also captured the 6 ½-furlong True North (G2) June 8 at Belmont Park. He owns 11 wins, eight in stakes, and $1.2 million in purse earnings from 17 career starts.

Florida-bred Imperial Hint won the first graded-stakes of his career at Laurel Park in 2017 in the General George (G3), which followed a victory four weeks earlier in the Fire Plug Stakes. They remain his lone races at Laurel.

Also under consideration for Imperial Hint is the six-furlong Vosburgh (G1) at Belmont Sept. 29, a ‘Win and You’re In’ race for the $2 million Breeders’ Cup Sprint (G1), in which he finished second by a length to eventual champion Roy H last fall. The six-furlong Sprint will be run Nov. 3 at Churchill Downs.

“We are still deciding,” Carvajal said. “I talked with Mr. Mamone and we’re thinking about the Vosburgh but we also have the race at Laurel in mind. We’re leaning toward the one in New York right now but as the weeks go by and you get closer, you never know. Horses sometimes are a little unpredictable and sometimes they tell you where they want to go.”

The 27th running of the six-furlong De Francis Dash highlights seven stakes worth $900,000 in purses to be contested on the first of several super Saturday programs during Laurel’s calendar year-ending fall meet, which begins Friday, Sept. 7.

Nominations for all the Sept. 15 stakes close Thursday, Sept. 6.

Racing in Maryland is currently being conducted at the State Fairgrounds in Timonium through Labor Day, Sept. 3.

Talking Horses: Cause Of Causes ruled out of the Grand National...