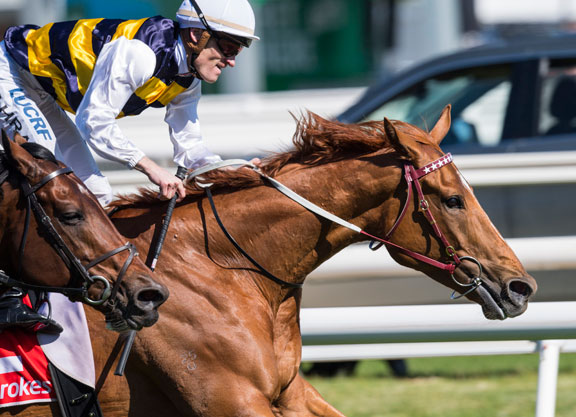 Backing up from his decisive three-length victory in the G1 Ranvet S. (2000m) last Saturday, the Darren Weir-trained Gailo Chop (Fr) (Deportivo {GB}) is the form horse going into Saturday’s G1 Tancred S. (2400m) at Rosehill, and once again should prove very hard to beat. The way he surged away for jockey Mark Zahra last time out suggests the 2400m should pose no concern, and with only one prior attempt at the distance, the 7-year-old looks the one.

The 2016 Melbourne Cup winner Almandin (Ger) (Monsun {Ger}) has recorded two very good efforts, both over 2000m this time in and the step up in distance to the 2400m will be right up his alley. With a win and a second from just two starts over the distance, the Liam Howley-trained gelding could prove the better of favourite Gailo Chop if he is found wanting over the concluding stages of the race.

While she is a Group 1 winner over 2000m, it’s actually hard to pinpoint exactly what the best trip is for Nick Olive’s Single Gaze (Aus) (Not A Single Doubt {Aus}). A runner in the G1 Golden Slipper (1200m) and also the G1 Melbourne Cup (3200m), the talented 5-year-old is nothing but consistent, and after looming up as if she was going to make a race of it with Gailo Chop in the Ranvet, her run petered out, suggesting she may not be looking for the 2400m, or she is still reaching peak fitness. Either way, she’ll be in it for a long way.

Impressive when capturing the G3 Sky High S. (2000m) on Mar. 17, the Richard Freedman-trained Auvray (Fr) (Le Havre {Ire}) is another with good form at the trip, winning four of his eight starts, and although he is meeting some true Group 1 class horses, he is in form and will run all day.

A dual 2400m winner in France, the Hayes, Hayes and Dabernig-trained Harlem (GB) (Champs Elysses {GB}) comes into the Tancred off a slightly indifferent performance in the Ranvet when beaten close to seven lengths, but with his form at the trip and also around the favourite, the Michael Walker-ridden 6-year-old should not be discounted.

Navarro breaks his own single-season training record again at Monmouth

The Everest horses Alan Jones will have his eye on

Horse racing tips TODAY: Horses you MUST back at Kelso and...