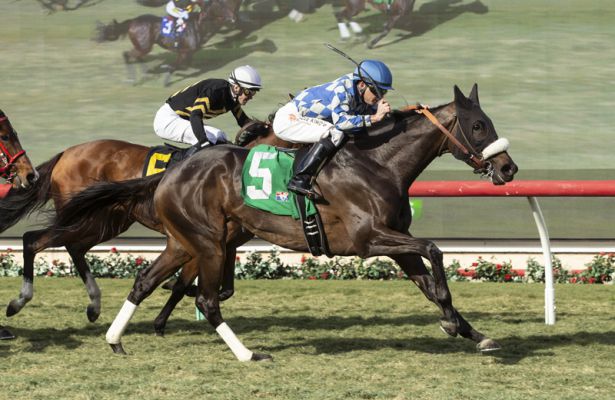 India Mantuana, a four-year-old filly claimed for $40,000 last August by trainer Ray Bell, hung on gamely in the final strides under a masterful ride by jockey Tyler Baze to complete a wire-to-wire victory Thursday in the featured Grade III $100,000 Red Carpet Handicap.

Overlooked in the wagering at 18-1, Indian Mantuana was sent to the lead shortly after the start of the mile and three-eighths grass marathon, was beautifully rated by Baze and held on to win by a diminishing half-length over the onrushing Siberian Iris. Another half-length back in a deadheat for third were 6-5 favored Vexatious and Escape Clause.

With no perfect tickets in the Thanksgiving Day Pick Six, Friday’s program will feature a carryover of $52,114 and a Single Ticket Jackpot pool of $94,515. Post time for the first race Friday is 12:30 p.m., featuring the Grade II $200,000 Hollywood Turf Cup.

TYLER BAZE (India Mantuana, winner) – “You know, when I was young and played baseball, I was really fast. Stole a lot of bases. Think I might have stolen a horse race here. That (going far to the front) wasn’t really the plan. It just happened. I just wanted to ride her like I did here last summer; not fight her; let her do her thing. She was just going easy out there. Sometimes it isn’t how fast they’re running, it’s how they’re doing it. She was doing it the right way today.”

FLAVIEN PRAT (Siberian Iris, second) – “I asked her and she gave me a very good kick. The winner just got away from us.”

RAFAEL BEJARANO (Vexatious, third – DH) – “She ran good, but the winner had it too easy out there.”

RUBEN FUENTES (Escape Clause, third – DH) – “She ran great again; only got beat a little way. These are Graded stakes mares and she is right there with them. She’s got a big heart.”

T.R. (RAY) BELL II (India Mantuana, winner) – “I had the binoculars on her and she just kept getting farther and farther in front. I could see she had her ears pricked and was very relaxed. I was amazed that somebody didn’t go with her. That was the only chink in her armor if somebody would have gone with her and softened her up. She doesn’t have that real acceleration but she’s a real staying type filly. She keeps up that one pace and just keeps on going and doesn’t give up.”

The stakes win was the first of the meet and the first in the Red Carpet for jockey Baze. He now has 38 stakes wins at Del Mar.

The stakes win was the first of the meet and the first in the Red Carpet for trainer Bell. He now has six stakes wins at Del Mar.

Owner Richard A. Bell (no relation to the trainer) is from Norman, OK.

editor - June 9, 2018
0
GOD Given just got home after a great tussle with Crimson Rosette to land the Group 3 Pinnacle Stakes. Luca Cumani's filly was lonely...

My Boy Jack Should Make Derby Field After Lexington Win –...

Laurina and Presenting Percy among a host of stars that could...