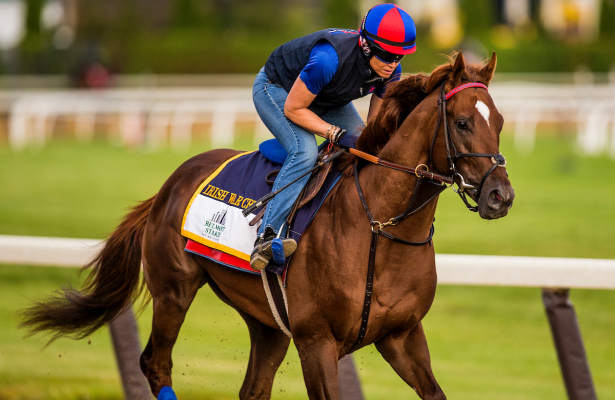 The prestigious Ricoh Woodbine Mile, which offers ‘Breeders’ Cup “Win and You’re In” status, has drawn nominations from across North America and Europe.

Isabelle de Tomaso’s homebred Irish War Cry will make his turf debut in the Ricoh Woodbine Mile for trainer Graham Motion. The 4-year-old Curlin chestnut captured the Grade 2 Holy Bull and Grade 2 Wood Memorial as a sophomore and was among the favorites for the Kentucky Derby where he split the field in 10th.

Irish War Cry opened his 4-year-old account with a score in the Grade 3 Pimlico Special but was vanned off following his most recent outing in the Grade 1 Stephen Foster Handicap at Churchill Downs.

“Basically, he had heat stroke. It was excessively hot,” recalled Motion of the Foster effort. “Obviously, coming to you in the middle of September, it’s going to be cooling off and the grass has always been something in the back of my mind. It’s something I’d like to try.”

“There’s every reason to think he should handle it,” said Motion of Irish War Cry’s turf debut. “Most of the family tended to be grass runners. He’s perhaps been the exception as he handles the dirt so well.”

“He’s one of the most talented horses I’ve trained, but the frustration of dealing with his idiosyncrasies have been confusing to figure out,” said Motion.

Voodoo Song, trained by Linda Rice for owner Barry K. Schwartz, has won eight of 16 career starts and broke through at the top flight last time out with a victory in the Grade 1 Fourstardave, at Saratoga.

The 4-year-old son of English Channel is one of several New York-breds to rise to prominence of late.

“Diversify won the Whitney here and Mind Your Biscuits is a New York-bred as well. It’s been a great year for New York-breds,” said Rice from Saratoga. “I personally claimed and raced Palace, who won two Grade 1 races here at Saratoga.

“Voodoo Song has a tremendous amount of try in him and he doesn’t quit,” continued Rice. “I’ve run him at various distances. He’s won at seven furlongs this year and he’s won at a mile and three-eighths here at Saratoga. He’s pretty versatile and he has a lot of natural speed and definitely has a lot of try when a horse comes to him in the stretch. He doesn’t give up easily.”

“It’s been awhile since I’ve taken anything to Canada, but I like going any place I win,” laughed Rice.

Sean and Dorothy Fitzhenry’s Mr Havercamp will go into the Ricoh Woodbine Mile off a first graded score having captured the Grade 2 Play the King Stakes on August 25 at Woodbine. Trained by Catherine Day Phillips, the Court Vision chestnut is perfect in four attempts over the E.P. Taylor Turf Course including previous turf successes in the Vice Regent and Bunty Lawless Stakes here last year.

European raider Lord Glitters will ship to Woodbine from a victory in the Group 3 Strensall Stakes at York, a path that proved successful for winning connections Geoff and Sandra Turnbull and trainer David O’Meara with Mondialiste in the 2015 Ricoh Woodbine Mile.

Trainer David Simcock will saddle the well-traveled Arod for a third attempt at the Woodbine Mile having finished fifth in both the 2016 and 2017 runnings.

A full list of nominated horses is available below.

In addition, the Sunday, September 16 card at Woodbine includes two ‘Breeders’ Cup Win and You’re In’ races for two-year-olds highlighted by the Grade 1 $250,000 Natalma Stakes for fillies and the Grade 1 $250,000 Summer Stakes, both to be contested at one mile on the grass.

How do I bet at the Cheltenham Festival, what is a...

editor - January 9, 2019
0
THE four-day Cheltenham Festival is just over two months away. The prestigious meeting is one of the biggest betting weeks of the year, and...