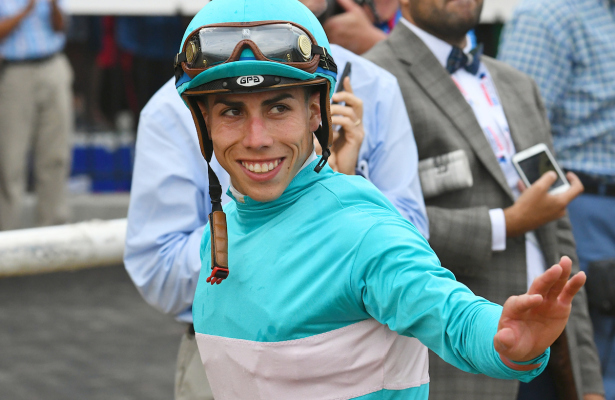 Jockey Irad Ortiz, Jr. added to an impressive month when he notched his 2,000th career victory on Saturday at Belmont Park. The 26-year-old piloted Gambler’s Fallacy (No. 8) to the winner’s circle in the sixth race, a 1 1/16-mile allowance on the inner turf, giving him his second straight win on the day and the 1,910th in the continental United States, along with 90 in his native Puerto Rico.

Ortiz started the month by earning his second Angel Cordero, Jr. award as Saratoga’s leading jockey with 52 wins and earnings of more than $4.5 million. He has already registered three Grade 1 wins this year at three different tracks, with Diversify in the Whitney at Saratoga Race Course, Robert Bruce in the Arlington Million at Arlington Park and A Raving Beauty in the Longines Just a Game at Belmont.

“I came in today and they told me I was two away from 2,000. Then I won back-to-back, so I’m so happy,” Ortiz said. “My family is here and they’ve supported me all the time. I thank God for staying healthy and allowing me to do this.

“Hopefully I can just keep doing what I’m doing. All the trainers and the owners, I’m so thankful for the support. They all help me; without them, nothing would happen. Hopefully, I can stay healthy and just keep going.”

Gambler’s Fallacy is trained by Chad Brown, with whom he has won 10 combined graded stakes races this year.

“I feel really good getting 2,000 with him because he’s helped me a lot in my career. We’ve had a lot of success together,” Ortiz said. “I’m so happy to get it with Chad.”

Ortiz won his first race aboard Wild Logic on January 2, 2011 at Hipodromo Camarero in Puerto Rico. He has since won three year-end NYRA riding titles, finishing atop the leader board in 2014-15 and 2017.