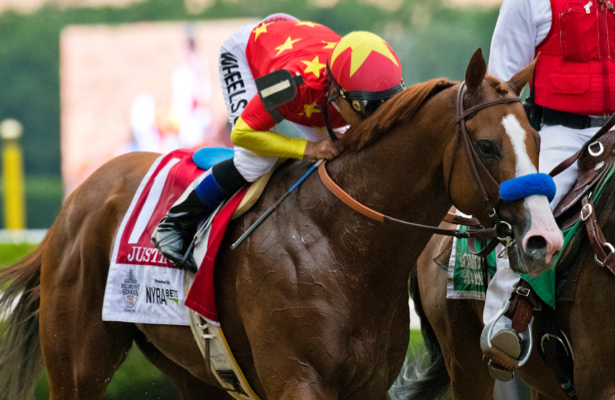 The National Thoroughbred Racing Association announced Wednesday that Justify‘s dominant victory in the 150th Belmont Stakes to become just the 13th Triple Crown winner has been voted the 2018 NTRA Moment of the Year based on the results of 2,260 votes cast via Twitter and an online poll.

The winning moment occurred on June 9, 2018. With Hall of Fame jockey Mike Smith in the irons, Justify led every point of call in the 1 1/2-mile race to prevail by 1 3/4 lengths and cap off his incredible ascent into the history books. Along the way, the Bob Baffert-trained colt also overcame the “Curse of Apollo” by becoming only the second horse to win the Kentucky Derby after not racing as a 2-year-old (Apollo was the first in 1882). Two weeks later, he then emerged from the dense fog in a surreal Preakness Stakes victory.

The connections of Justify will be honored at Thursday evening’s 48th AnnualEclipse Awards Presented by Daily Racing Form, Breeders’ Cup and The Stronach Group at Gulfstream Park Racing and Casino in Hallandale Beach, Fla.

The Eclipse Awards will air live on TVG at 8 p.m. ET. TVG is available in more than 45 million homes nationwide. The ceremony also will be available via DirecTV Now, Apple TV, Amazon Fire TV, and Roku.

The Racetrack Television Network (RTN) also will make the Eclipse Awards available across all of its platforms, including Roku.

NTRA Moment of the Year voters chose from 12 occurrences illustrating a range of human emotions as well as outstanding displays of equine athleticism. Finishing second was Diversify’s victory in the Whitney Stakes last August, his final win before the passing of trainer Rick Violette, Jr.

The first-ever “NTRA Moment of the Year” was the touching scene between Charismatic and jockey Chris Antley following the 1999 Belmont Stakes. The next year’s winner was the stretch run of the 2000 Breeders’ Cup Classic, which saw Tiznow hold on for a dramatic victory against Giant’s Causeway. Tiznow won again the following year as fans selected his stirring repeat victory in the Classic over Sakhee. In 2002, fans cited the passing of the last living Triple Crown winner, Seattle Slew. In 2003, the popular Kentucky Derby win by Funny Cide was selected. Birdstone’s upset win in the Belmont Stakes over Smarty Jones took down top honors for 2004. In 2005, fans selected Afleet Alex’s spectacular victory in the 2005 Preakness Stakes.

Voters in 2006 chose Barbaro’s gallant struggle to recover from his Preakness injury while at the New Bolton Center. The 2007 Moment of the Year was a historic victory by filly Rags to Riches over Curlin in the Belmont Stakes. In 2008, it was Zenyatta’s win in the Breeders’ Cup Ladies’ Classic. Zenyatta “repeated” in 2009 as fans selected her triumph in the Breeders’ Cup Classic.

In 2010, fans selected Blame’s narrow Breeders’ Cup Classic victory over Zenyatta. Drosselmeyer’s hard-fought win over Game on Dude in the Breeders’ Cup Classic was the public’s choice for 2011. For 2012, the recovery of Paynter from near-deadly battles with laminitis and colitis captured the hearts of voters like no other story. In 2013, fans recognized Mucho Macho Man’s nose victory in the $5 million Breeders’ Cup Classic for his popular connections. The 2014 award went to California Chrome’s dominant win in Kentucky Derby 140. In 2015 there was a landslide vote in favor of American Pharoah’s historic Triple Crown-clinching Belmont Stakes win. California Chrome was again part of the winning moment in 2016 – a dramatic Dubai World Cup victory that came as Victor Espinoza’s saddle slipped out from underneath him. The 2017 season saw fans vote for the tragedy of the Lilac Fire that devastated the San Luis Rey Training Center in Bonsall, Calif., near San Diego.

editor - May 5, 2018
0
TIM GREDLEY is banking on his noisy neighbour making it a happy Newmarket homecoming. For 20 years Gredley – joint-owner with dad Bill of...

Winx to race for history, possibly at shortest price yet

Three longshots to fill your pockets on Tuesday, August 14