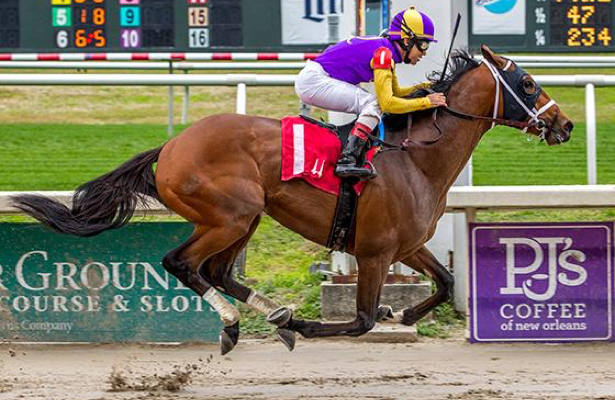 Thursday’s fifth race at Fair Grounds was billed as a showdown between two Tapit colts, the $2.6 million Gun It, a member of Gun Runner’s family, and the regally bred Cornacchia, a debut winner who overcame all kinds of trouble first out.

The the running started, and they couldn’t hang with Owendale.

The Big 3 came off the turn together in the 1-mile, 70-yard event — the same distance as Saturday’s Lecomte Stakes (G3) — with Owendale going on to win by 1 1/2 lengths. A victory in the allowance for non-winners of two should propel the colt on to a 2019 Kentucky Derby prep such as the Feb. 16 Risen Star (G2).

That’s evident in the Into Mischief colt’s past performances. Owendale, a $200,000 purchase for Rupp Racing, made his sixth career start Thursday at his fourth racetrack. The colt appeared to move forward in his last, when he battled Lecomte contender Tackett to a neck defeat on Dec. 22. It was another 5 3/4 lengths back to third.

Owendale’s final time Thursday was 1:42.54 over a Fair Grounds track rated “good” but drying out — and sometimes that type of surface can produce wonky results. That’s has to be the hope for connections of Gun It and Cornacchia, who could also move forward, but they won’t do so with nearly as much fanfare after finishing third and fourth, respectively.

Steve Asmussen-trained Gun It was handled confidently by Ricardo Santana Jr. as he took over the lead up the back stretch and maintained that advantage through the turn. Gun It didn’t throw his head about as in previous starts, but he also didn’t show as much speed.

“He’s a colt that is still learning how to put it all together,” co-owner Three Chimneys Farm President Doug Cauthen said going into Thursday’s race. “Steve just wanted to follow the conservative route and we wanted to follow his advice. We’re very happy with his last effort, it was a good progression and it was a great learning race. Once he figured out it was time to hit the front he did it and did it nicely. Hopefully there is still plenty under the tank.”

Each of Gun It’s starts have gone around two turns.

Cornacchia stretched out from six furlongs this week.

“He overcame some things in his first start and he’s had some good works since,” said Cox, who also trains the Gainesway Stable runner, before the race. “This is the next step to just stretch him out a little bit. It’s a solid group of horses. He’s always trained well and acted like a racehorse. We’re asking him to run against winners and two turns for the first time, but he’s one that we think a lot of.”

Doncaster call second inspection at 9am