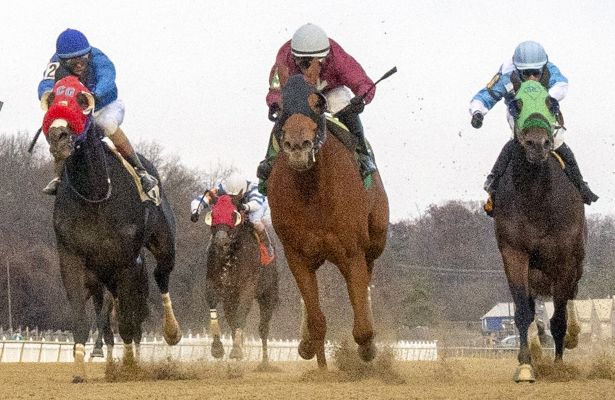 Hillside Equestrian Meadows’ Laki, racing for the first time since his runner-up effort in the Frank J. De Francis Memorial Dash (G3) Sept. 22, put away 4-5 favorite Lewisfield in mid-stretch and had enough left to turn back Rockinn On Bye by a half-length to win the $75,000 Howard and Sondra Bender Memorial.

It was the third career stakes win and second in three starts for the 5-year-old gelding Laki ($6.20), whose final time of 1:07.99 nearly broke Laurel’s track record of 1:07.95 for six furlongs set by multiple graded-stakes winning millionaire Richter Scale July 15, 2000.

“This horse always shows so much class,” winning regular rider Horacio Karamanos said. “The horse just keeps getting better. Every race he improves a lot.”

Fellow multiple stakes winner Lewisfield outran Laki for the early lead and was in front through a quarter-mile in 22.04 seconds. Laki settled in second but was eager to challenge and moved up alongside Lewisfield after a half in 44.60, and the two rivals turned for home together.

Laki gradually edged by Lewisfield down the stretch and was in command past the eighth pole but held off late-running Rockinn On Bye for his seventh win in 10 career starts over his home track.

“He broke out of the gate and I sent him a little bit because I saw [Lewisfield] coming so I tried to go with him, but he took the lead. I sat behind and on the middle of the turn I asked my horse and he started moving nicely,” Karamanos said. “At the top of the stretch I knew I had it, but [Lewisfield] is tough to the wire. Laki … when he got in front he was looking around so I hit him a couple times and he gave me a nice kick.”

Rockinn On Bye was a length ahead of Lewisfield in third, followed by Clubman, Sonny Inspired and Greatbullsoffire.

Trainer Damon Dilodovico said he would consider both the $100,000 Dave’s Friend Stakes for 3-year-olds and up at six furlongs and the $75,000 Jennings Stakes for Maryland-bred/sired horses 3 and up at one mile Dec. 29 for Laki, with the long-term goal being the seven-furlong, $250,000 General George (G3) Feb. 16.

“I thought he was going to get caught,” Dilodovico said. “There’s a shot we could possibly stretch him out and there’s also the sprint at the end of the month, but if all goes well we’d like to be back here in February.”

Making his third start since being transferred to Fair Hill-based trainer Kelly Rubley, Alwaysmining ($8.80) ran seven furlongs in 1:21.91 over a fast main track to earn his second straight gate-to-wire triumph following a 10-length optional claiming romp in the slop Oct. 27, also at Laurel.

“He won really good last time and I really liked him. They asked me if I wanted to come and I said yes,” said Centeno, who winters at Tampa Bay Downs. “I was watching the races and looking at the track and it seemed a little fast, so we tried to get a good position. He took the lead and made it easy all the way to the wire.”

Alwaysmining, a gelded son of Stay Thirsty, was pressed by 50-1 long shot V.I.P. Ticket through a quarter-mile in 22.83 seconds and tracked by Our Braintrust, racing for the first time since his Tremont Stakes victory June 9. James F. Lewis III Stakes winner and 3-2 favorite Scrap Copper joined the chase after a half-mile in 45.34.

Centeno shook up Alwaysmining leaving the quarter pole, opening up by 3 ½ lengths turning for home and never being threatened through the lane to win by 2 ½ lengths. Our Braintrust stayed on for second, 2 ¼ lengths ahead of Scrap Copper, followed by Thatwouldbegrand, Sky Magician, Trifor Gold, Outofthepark and V.I.P Ticket.

Alwaysmining broke his maiden by 5 ½ lengths in June at Laurel for original trainer Laura Wohlers and was fifth in one start for Eddie Graham before being sent to Rubley. After struggling in seventh over a soft turf course in the Laurel Futurity, he romped in his return to the dirt last out.

“I’ve been very happy with how he’s been training coming into this race. The last race was obviously quite impressive,” Rubley said. “I think the fun part about this horse is that he’s versatile. He’s won at a mile, he won at 5 ½ and now seven [furlongs], so the possibilities are endless. We’ll see how he comes back from this. We’re going to enjoy today.”

Make Family First Stable’s Money Fromheaven, making her eighth career start but first in a stakes, came with a steady drive on the far outside and outran 9-5 favorite No Mo Lady to the wire to spring a 23-1 upset in the $100,000 Maryland Juvenile Filly Championship.

Ridden by Victor Carrasco for trainer Hamilton Smith, whose Scrap Copper was beaten as the favorite in the Maryland Juvenile Futurity one race earlier, Money Fromheaven ($49.80) won for the second straight time after needing seven starts to break her maiden. The winning time for seven furlongs was 1:24.18.

Questionoftheday was quickest from the gate and led by a length and a half after going the first quarter-mile in 22.17 seconds. The Mike Trombetta-trained stablemate of No Mo Lady opened up by seven lengths through a half in 44.38 and was still in front by four heading into the stretch before getting weary as her pursuers closed in.

No Mo Lady and Julian Pimentel came up alongside the tiring leader in mid-stretch as Money Fromheaven ranged up, and the two brushed slightly closing to the wire before Money Fromheaven edged past.

“Hammy did a great job with her. He didn’t give me any instructions. [He] told me, ‘You rode her enough and you know what to do, just do the best you can,’” Carrasco said. “In the first part of the race, I just sat on her and I waited. I followed Julian most of the way. As soon as we turned for home, I tipped out and she gave me everything she had and we got it done.”

Maryland Million Lassie runner-up Belial was third, with Waiting for a Star, Nine Martinis, Like a Pro, Questionoftheday, Past Perfect and Sip of Sunshine completing the order of finish.

Racing Post - December 26, 2018
0
Thom Malone is joined by Johnny Ward and Brian Sheerin for the final show of 2018. Includes part two of our feature of...

Lemons Forever Named Broodmare Of The Year By KTOB – Horse...

Bryony Frost on riding a winner at the Cheltenham Festival

Laurina out to cement Champion Hurdle credentials at Sandown | Horse...