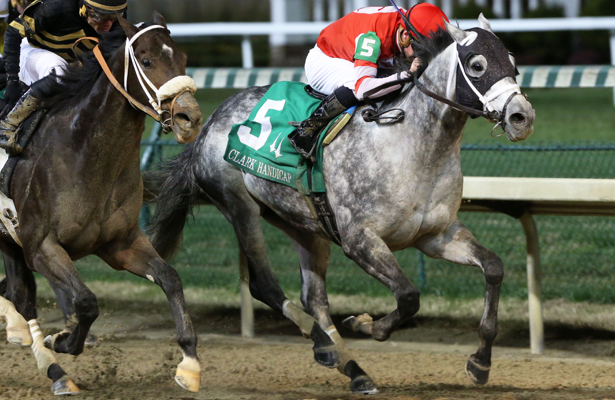 Leofric, who had never run in a graded stakes until February, quietly put together one of the best second halves of the season entering Friday’s Grade 1, $500,000 Clark Handicap. Now, the secret’s out on the Brad Cox-trained son of Candy Ride.

A winner of the West Virginia Governor’s Stakes (G3) and Fayettte (G2) at Keeneland, the gray succeeded at the top level at Churchill Downs, holding off the game 3-year-old Bravazo to strike under the Twin Spires.

Leofric took a pocket trip sitting only a couple lengths from the pace set by Prime Attraction — the half mile went in 47.58 — but whereas those two were separated by only a head in their previous start, Leofric appeared much better Friday.

“This horse had been doing really well since, actually, all fall — summer and fall,” Cox said. “I was a little concerned with running him back quick after the Fayette, but he came out of that race in good shape, had two really solid breezes over this track, and he showed up.

“Florent did a good job saving ground around both turns. This horse, you get in a fight with him, he’s going to give you what he’s got.”

Leofric poked a head in front at the top of the stretch and went on to win by a neck under jockey Florent Geroux, with favored Seeking the Soul, at 3-2, stuck in traffic and unable to get through and defend his 2017 Clark victory. Prime Attraction held for fourth in the field of eight.

The winning trip came in 1:48.59 for 1 1/8 miles. Cox said that with Bravazo chasing, the race could have gone either way at the eighth pole.

“We’ve had him for a long time, going on, I guess, two years,” he added of Leofric. “He’s just been a horse that’s had some setbacks. You can see that in the racing form. He’s come back better than ever this year. He’s a solid horse. He’ll let you know when he’s ready to run.”

“He just keeps improving and getting better and better,” Geroux added.

Cox expects Leofric, who’s campaigned by Steve Landers Racing, to remain in training this winter. He could target next year’s Oaklawn Handicap (G2) as the string moves first to Louisiana and then Arkansas.

“We said something about it,” Cox said. “It’s something we could look at.”

This continued a big year for the barn, with Monomoy Girl the Louisville native Cox’s first Grade 1 winner. She went on to win the Kentucky Oaks and Breeders’ Cup Distaff under the Twin Spires. The Clark checked another box at Cox’s home track.

Horse-racing track plans out of the gate

HRI chief’s fears over no deal as Brexit chaos deepens |...