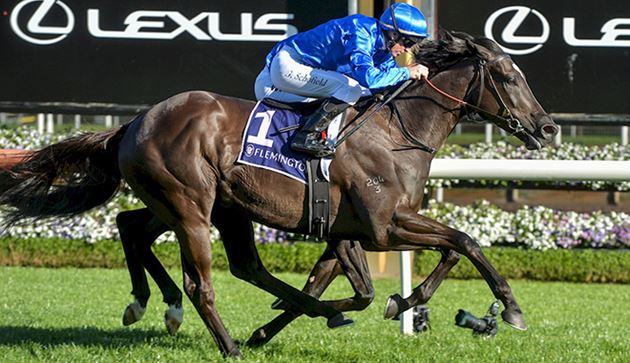 The last word from those associated with many of the runners in this afternoon’s big race, as told on RSN Sport927 on race morning.

5 – Muntahaa: “He’s a fairly versatile when it comes to ground and I think anything with Good in the description he likes. He’s won his best races on Good to Firm, so if we have a little bit of rain and it dries out, we’re not going to be too upset about that.” John Gosden’s travelling foreman Thady Gosden.

6 – Sound Check: “I think the big track at Flemington will suit him better and I think it will be truly-run enough to say that he’s going to be able to relax, because he just got overracing when the speed came out of the race in the Caulfield Cup,” trainer Mike Moroney.

10 – Avilius: “As far as our preparation goes, we’ve given him the grounding, he’s had the right campaign and he’s got every reason to run a big race today. From that perspective, anybody who is in Avilius corner can take some confidence,” trainer James Cummings.

11 – Yucatan: “He’s in the Melbourne Cup with a nice weight, had had to win the Herbert Power to get in, and he was so impressive doing it. He’s definitely improved for the gap between that race and now and he’s in great form this morning. He couldn’t be any better to be honest with you, if he just gets a little bit luck in running, I’m sure he’ll go close,” Aidan O’Brien’s travelling foreman T.J. Comerford.

12 – Auvray: “To get him to a Melbourne Cup after being beaten a cumulative 96 lengths in Brisbane 18 months ago, I think all my team can put a little feather in their cap over that one,” trainer Richard Freedman.

14 – Red Cardinal: “We’re only hoping, but we’ve got a good jockey on, a good barrier, and any rain coming would be plus. I’m just happy to have a runner in the race,” trainer Darren Weir.

15 – Vengeur Masque: “We more or less let the autumn go past us on purpose with the aim to get him here at his best and I can’t fault him. Everything’s gone to plan, he looks like he’s peaking for the race and I couldn’t be happier,” trainer Mike Moroney.

16 – Ventura Storm: “To me he’s a completely different horse going into this race this year. He’s only had two tries at 3200, but he had a wind problem then. So this is his first run at 3200 without the problem in the wind. I think he’s peaking at the right time and I’ really confident he’s going to run a good race,” co-trainer Ben Hayes.

17 – A Prince Of Arran: “I’m hoping that I can end up forward of midfield or midfield and track the right horse into the race. I’ve done some research into horses that have drawn 20 and so forth and we’ll get a good and I couldn’t be happier with the way the horse is and I’m looking forward to it,” jockey Michael Walker.

19 – Sir Charles Road: “All I know is the horse is well, he’s in peak condition – we had a bit of setback earlier on – but he’s well and truly over that over that now. I guess it comes down to class and we won’t know about that until later today,” co-trainer Lance O’Sullivan.

23 – Cross Counter: “I’ll be disappointed if we’re not bang there, to be honest with you, off that weight with his profile. The rain is obviously a concern, but I’d say it’s a concern for quite a large number of the field. I’m looking forward to the day and I feel we’ve got the right horse to hopefully be competitive,” trainer Charlie Appleby.

24 – Rostropovich: “Rostropovich ran a good race behind Winx, he was not beaten that far, and now he’s on the bottom weight in the Melbourne Cup. You’d have to give him a great chance,” T.J. Comerford.

Europe urged not to put up barriers to horse movement if...