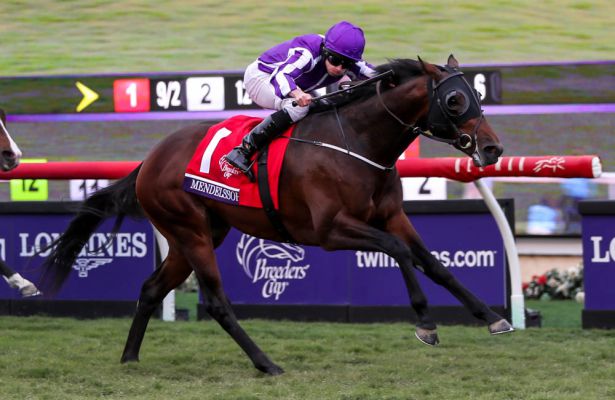 The New York Racing Association will on Saturday finalize its list of horses invited to the July 7 Belmont Derby, a Grade 1, $1.2 million race on turf. Nominations also close this weekend for the Grade 3, $300,000 Dwyer on dirt.

As to which one Mendelssohn will enter in his return to the United States, well, stay tuned.

“He hasn’t made his decision yet,” NYRA stakes coordinator Andrew Byrnes said of Mendelssohn trainer Aidan O’Brien. “I think he’s going to be here for one of the two races, yes.”

The Belmont Derby would offer Mendelssohn a shot at more immediate prestige, as he also won a Grade 1 on grass traveling from his Ireland base to the U.S. in the 2017 Breeders’ Cup Juvenile Turf. But the Dwyer would mark his second dirt start after an unsuccessful try at the Kentucky Derby.

Connections have stated a goal to campaign the $3 million Coolmore colt up to the Breeders’ Cup Classic.

The 1-2 finishers of Belmont’s Pennine Ridge (G3) — Catholic Boy and Analyze It — are expected to go in the Belmont Derby, while Hawkish comes out of a Penn Mile (G2) win. My Boy Jack, another Derby runner, will switch to turf for the 1 1/4-mile feature.
Enticed and Firenze Fire are expected to run in the Dwyer, while Todd Pletcher-trained Magnum Moon is back on the work tab and would be a “logical” contender, Byrnes said. To see a Magnum Moon-Mendelssohn rematch would be interested, given the former wiped the latter out leaving the gate in the Kentucky Derby.

Patrick Mullins becomes most successful amateur rider of all time with...