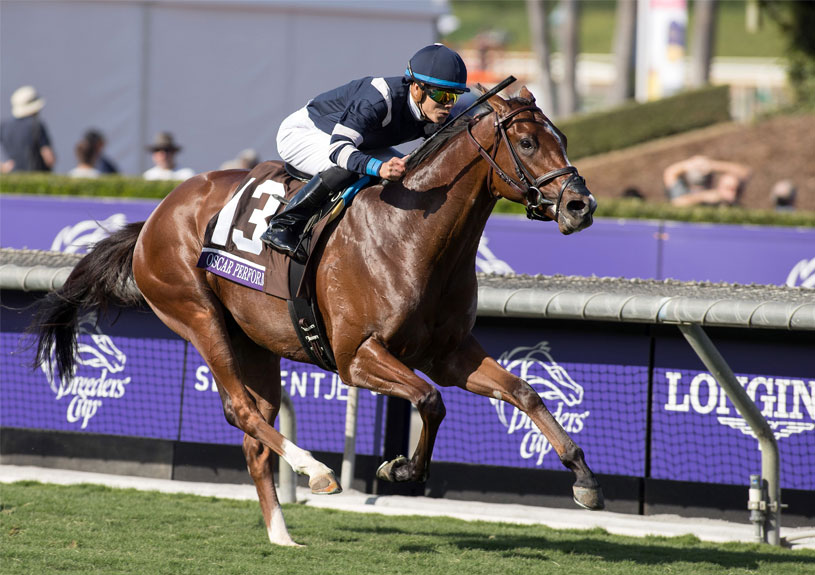 The Bell family of Mill Ridge Farm may be All-American to its core-current proprietor Headley Bell is a grandson of one of the founders of Keeneland, after all-but their influence on European racing at the highest level has been undeniably profound. They bred the 1968 Guineas and Derby winner Sir Ivor, and formerly stood influential sires Gone West and Diesis.

Mill Ridge hasn’t historically stood many stallions, so when the Bell family puts its faith in one, it’s worth taking notice. Mill Ridge’s latest recruit, Oscar Performance (Kitten’s Joy) follows the farm’s turf-oriented theme: he is a four-time Grade I winner on the grass at a mile or a mile and an eighth including the GI Breeders’ Cup Juvenile Turf; he is by America’s best turf sire, out of a Theatrical (Ire) mare and is a full-brother to Oscar Nominated, a Grade III winner on the turf.

Being in Kentucky, Oscar Performance is a longshot to receive much early support from European breeders, of course, but there is plenty of reason to believe that his quest to achieve international success as a sire could be much more straightforward than the one  his sire endured. Kitten’s Joy himself is on plenty of lips in Europe at the moment thanks to champion Roaring Lion, who enters stud next year, and Bobby’s Kitten, another Breeders’ Cup winner who has his first foals at the sales this year. Let’s not forget Hawkbill, the winner of the G1 Coral-Eclipse and G1 Dubai Turf who stands at Darley in 2019.

Kitten’s Joy is one of a number of American stallions to make an impact on European racing in recent years–others include Scat Daddy and War Front-and the popularity of American sires at the sales-especially the breeze-ups-only seems to grow each year. Add to all that the current upswing of high-quality turf racing in the U.S., and it’s easy to see why Headley Bell said he thinks Mill Ridge is ahead of the curve in standing Oscar Performance, who was born at the farm as a homebred for Amerman Stables.

“We think we’re ahead of the curve on the turf appeal,” Bell said while showing off the 4-year-old at Mill Ridge last week. Of the swings in fashionability of American sires in Europe, he added, “We all know it goes in waves and cycles. We have that 20- to 25-year cycle and it seems to be swinging back now.”

To stand a stallion in such an ultra-competitive market, the smaller nurseries unsurprisingly need to find areas to compromise on their prospects. For Mill Ridge and Oscar Performance, that is the fact that he is a turf horse in America, but Bell said he no longer sees that as a downfall in the U.S. market.

Bell said it has been a consideration to promote the horse in Europe.

“You’d love for him to be promoted everywhere and that’s kind of what the thought process is right now,” he said. “And with Roaring Lion, people really know Kitten’s Joy.

“What this horse has is that he’s a miler; he’s a track-record holder at a mile and everybody likes a miler. And with Theatrical on the dam’s side, there’s no question he’s grass. Promotion-wise for Europe, I don’t know how many Europeans are breeding mares over here, but he’d certainly be available and he’d be value for anybody that wanted to do that.”

Mill Ridge has a history of making top stallions, such as Gone West and Diesis, who have both left indelible marks as sires and broodmare sires in Europe. Bell said that when Mill Ridge starts a new stallion, it works to get the support of shareholders and successful breeders that will provide good mares. He acknowledged, however, that a stallion is either going to make it or he isn’t, despite human intervention.

With Mill Ridge behind him, the odds must be tipped in the favour of Oscar Performance to make it. And having a quintessential turf profile, he could be one to bet on for European success, too.