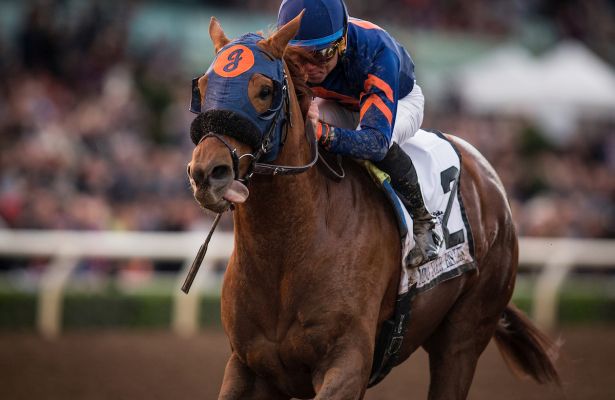 Mind Your Biscuits is “sitting on go” after a Friday morning workout at Churchill Downs, trainer Chad Summers said, adding that “we just want the race to be here now.”

Of course, there’s still a question of which Breeders’ Cup event it’ll be for the highest-earning New York-bred of all time. Summers said Mind Your Biscuits will be pre-entered in multiple races with the Classic, Dirt Mile and Sprint each possible.

The 5-year-old son of Posse put in another local workout beside fellow millionaire Imperative, out-working that one while finishing up six furlongs in 1:15.

“Broke off a little bit slower than we wanted,” Summers said, “but other than that, the work went according to plan.”

WATCH: Mind Your Biscuits breezed 6 furlongs in 1:15 in preparation for #BC18 at #ChurchillDowns.

Leading up to Monday’s pre-entry deadline, Summers will now weigh his options. Horses can appear on two race lists — those will be revealed Wednesday — before declaring to run one race at a later deadline.

Two horses he mentioned in particular were X Y Jet, the Sprint’s potential pace setter who could come back from injury, and Promises Fulfilled, the 3-year-old speedster who will add pressure in either the Sprint or Dirt Mile. Mendelssohn and McKinzie could also cut some swift fractions in the Classic.

For Mind Your Biscuits, the more pace the better in his race of choice.

“We know he loves this track, and we think whichever race we run in, we’re going to be one of the horses to beat,” Summers said. “I think you want to put him in the race that gives him the best chance to win. Like I said, speed has a lot to do with it.

“If these races set up how I think they’re going to set up, the Classic has the most speed in front, which makes it a good race for us.”

Mind Your Biscuits won multiple Grade and Group 1 races in 22 starts to open his career, including a rallying score in last March’s Dubai Golden Shaheen to repeat at Meydan. Sensing his top horse could go longer, Summers decided try two turns, saddling Mind Your Biscuits for a runner-up in the Whitney Stakes (G1) before a win in the Lukas Classic (G1).

Summers likes Mind Your Biscuits’ chances given Churchill Downs’ long stretch. The horse has had about a month of training — plus his last race — over the surface, too. He was defeated by California-based contenders in his last two tries at the Breeders’ Cup on the West Coast.

“Here at Churchill, I think it’s more of a level playing field,” the trainer said. “These California horses have to get on a van and a plane, and they’ve got to come here. We have that advantage of having already been here and getting a race over the track.

“We think there’s a lot of things going in our favor right now. We’re going to sleep well the next 15 days. Some of these other trainers — they’re going to have questions they need to answer. I think we’re in a good spot.”

Summers said major preparation is done for Mind Your Biscuits, who could two-minute lick next week before blowing out the week of the Breeders’ Cup.

Catching Pigeons: Gossip and tips from the gallops – Horse Racing

All you need to know with the Welsh National and Altior...

Sam Twiston-Davies with a tour of Grange Hill Farm